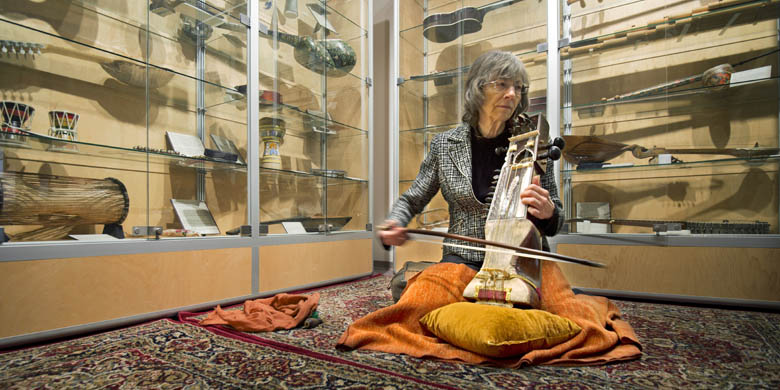 (Edmonton) A University of Alberta music researcher has been recognized by the U.S.-based Society of Ethnomusicology�a nod she says is less about her and more a statement on the quality of the university’s ethnomusicology education.

“The society is the most dominant and influential society of its kind in the world of ethnomusicology,” said Regula Burckhardt Qureshi, professor emerita in the Department of Music, who was made an honorary member of the society, one of its highest recognitions. “This means our study is reaching beyond western music and musical notes.”

Relating the world’s sounds with the social conditions of their producers is a central contribution Qureshi began making during a research trip to India almost 50 years ago.

“While there, I found out that the people who had the greatest mastery in Sufi music were actually very poor and marginalized, and that disturbed me,” Qureshi recalls. “When I returned to Canada, I thought, ‘what am I doing studying this music when these people have almost nothing to eat?’ Yet they shared an ocean of musical knowledge with me.”

She channeled her compassion into her doctoral dissertation, Sufi Music of India and Pakistan: Sound Context and Meaning in Qawwali, which was eventually published in 1986 and stands today as a kind of field manual for ethnomusicologists.

“The way we study had to be different�we had to be collaborative and accommodate the social lives of the people from whom we learn,” said Qureshi. “And not just learn their music but also what’s important to them, so we could contribute to the lives of people. That change has impacted ethnomusicology quite a bit.”

That trip to India also marked the beginning of cultural change that Qureshi instigated. While visiting a music college in Lucknow, India, the young professional cellist enquired about different instruments she could learn. At first, she was shown the sitar.

“I said, ‘I can’t play that,’” she recalled. “But I saw somebody in the corner who was playing an upright instrument, kind of like a mini cello, and he was playing it with a bow. I said, ‘that’s the instrument I want to learn.’”

She had picked the sarangi, a beautiful 18th-century stringed instrument said to approximate the human voice, but with an unflattering past. Qureshi soon learned the sarangi was ill reputed because it was the typical accompaniment to courtesans singing and dancing in salons for the pleasure of wealthy men.

“It just had a bad name, considered immoral and ostracized,” she said. “I knew it was beautiful and I was going to play it, period.”

She says puzzlement ensued at this foreigner who went for lessons at the home of her sarangi teacher. She was the first woman, the society notes, to master the instrument. And in so doing, the citation observes, Qureshi “paved the way for other women in South Asia and elsewhere to enter a realm that had been previously gender restricted.”

She returned from India knowing music is central to South Asian culture and has since been strengthening that bond. The society recognized Qureshi’s contributions�ranging from organizing music evenings in her home for Edmonton’s South Asian community to performing and teaching�and referred to her as the most illustrious ethnomusicologist in Canada.

At the U of A, Qureshi would go onto create the Canadian Centre for Ethnomusicology, where she is still the director, and according to the citation, has built “one of the country’s best graduate programs in ethnomusicology.”

“The university now is doing all the wonderful things that make it possible for people like me to connect our work, in a very productive way, with India,” said Qureshi.