U of A experts among those working toward a future where organs are available on-demand, off-the-shelf, saving millions of lives. 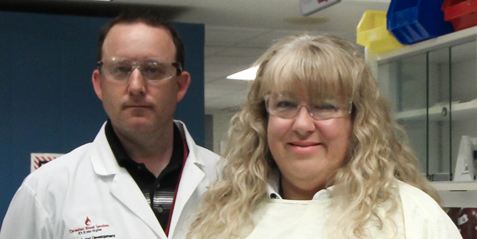 The world’s leading experts in organ and tissue preservation announced they are joining forces to help end the short transplant windows that result in countless missed opportunities to save lives, contending the potential impact is the same as curing cancer.

U of A cryobiology scientists Jason Acker and Janet Elliott are among those who authored a peer-reviewed consensus statement published in Nature Biotechnology yesterday.

“This paper is really a call to arms,” said Acker, a UAlberta professor of laboratory medicine and pathology who is also a senior research scientist at the Canadian Blood Services, and president of the Society for Cryobiology. “A diverse array of disciplines from surgeons to engineers came together two years ago in Silicon Valley to work on the foundation of this document. The world needs to know there is an opportunity to advance medicine through collaborative research and technology that could have a huge impact on human health.”

In the Nature Biotechnology statement, the researchers pointed out how for every one patient on the transplant waitlist who does not receive an organ in time, 10 hearts from donors go unused largely because of the four- to five-hour storage expiration window.

“It has been suggested that with all supply constraints removed, organ replacement could theoretically prevent more than 30 per cent of all deaths in the United States—doubling the average person’s likelihood of living to 80 years of age,” said the consensus statement’s authors.

Preservation breakthroughs could have profound benefits like removing the issue of distance in organ donation, holding onto unmatched organs for someone else rather than being forced to destroy them, and using off-the-shelf organs for heart attack victims, trauma cases and victims of accidental poisoning to name but three examples.

The community of researchers and clinicians also explored how many of the advances in biopreservation research—including cryobiology (or freezing)—offer great potential but require a coordinated effort across many research areas and stakeholder groups to bring them to fruition.

“Nowhere else in medicine is there such an opportunity for fundamental physical and biological science to have a far-reaching impact on human health as with cryobiology,” said Elliott, a UAlberta professor of chemical and materials engineering who is also an adjunct professor of laboratory medicine and pathology, the Canada Research Chair in Thermodynamics and an associate editor of Cryobiology, a top ranked peer-reviewed journal.

The University of Alberta is recognized worldwide as a pioneer and leader in transplantation rejection breakthroughs, preservation technology and diagnosing innovations, as well as for cryobiology research.

Some of the University of Alberta’s achievements include: developing the cryopreservation method to store islet cells for transplant in the treatment of Type 1 diabetes, establishing Canada’s first public umbilical cord blood bank, establishing an early autologous (self) stem cell transplant program, establishing one of Canada’s leading tissue banks, and conducting research that lead to the ability to store cartilage tissue for transplant.

Five of the 25 most downloaded papers in the last 90 days and three of the most cited papers published in the last five years in Cryobiology are penned by UAlberta researchers.

“We have a long history that goes back 40 years,” said Acker. “The scientific and technical challenges that face tissue and organ preservation can be overcome through collaborative, multi-disciplinary research and development.

“The cryobiology community in Edmonton is actively engaged in establishing the scientific groundwork that will lead to innovative solutions for many of the scale-up challenges facing tissue and organ preservation."

Many of the paper’s authors will gather in early August at an upcoming Organ Banking Summit at Harvard Medical School, which aims to eventually develop an organ banking program for an on-demand, off-shelf supply of organs and other tissues for transplantation.