Wrestling champion rises from the mat to earn education degree

In athletics and academics, Mike Asselstine has learned that losing is the key to winning. 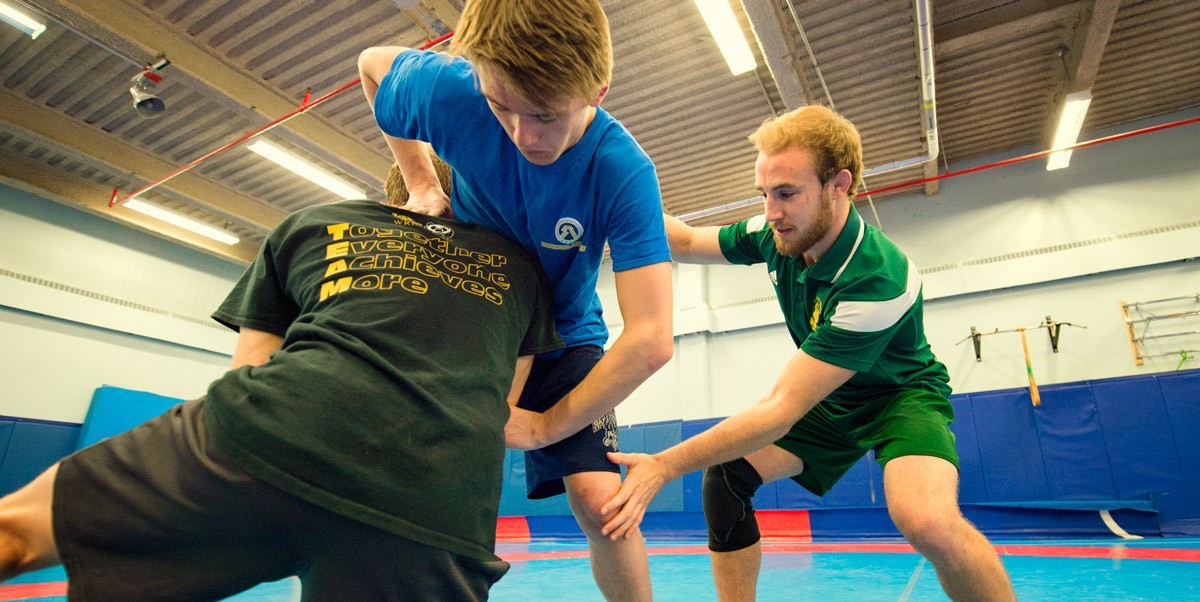 For Mike Asselstine, coaching young wrestlers is a way to give back to the teachers and coaches who have inspired him. (Photo: Richard Siemens)

If at first you don’t succeed, you’ll do that much better next time. In wrestling and in school, this credo has served Michael Asselstine well.

Asselstine, who just completed his bachelor of education degree at the University of Alberta, set a Canadian Interuniversity Sport (CIS) record in 2016 by seizing his third consecutive CIS gold medal and his third straight CIS Most Outstanding Wrestler Award. He also collected the Wilson Challenge Trophy as the U of A’s male athlete of the year for 2015–16, the second time he’s received that accolade. But the Edmontonian says it wasn’t a case of going from strength to strength.

“I haven’t always had the consistent success,” Asselstine says. “You have to lose to win. I’ve lost about 120 times in the last eight years. The ability of people I’ve lost to ranges from university athletes all the way to world champions and former Olympians. You’re going to lose—it’s just a matter of being able to learn from that.”

Likewise, Asselstine’s path to graduation was not a straight line. The pressure of balancing active involvement with wrestling at the varsity, national and international levels with full-time studies proved too much and Asselstine was forced to take a break from university after his first year. Luckily, a mentor he had known from when he started wrestling in junior high and later as one of his teachers at McNally High School encouraged him to give the U of A another try.

“I got kicked out after my first year,” Asselstine says. “So I worked for a year and a half, trying to figure out what I wanted to do. Then Owen Dawkins was hired on as head coach of Bears wrestling in 2009, and he helped me see that not only could I train better being in school, I could also get a degree so I could get a better job. So it’s worked out pretty well.”

Which isn’t to say it’s been easy to attain his athletic and academic goals. In addition to varsity bouts around Canada, Asselstine wrestled in the United States, Spain, Poland and Hungary in the past year, as well as vying for the sole men’s wrestling slot at the upcoming Rio Olympics (he placed third), all while completing the coursework and field placements for his education degree.

“I always joke that the wrestling season is 13 months out of the year,” Asselstine says. “The domestic season runs August through end of March, and the international season runs late January through November, so it’s a go-go-go situation.”

With his varsity wrestling career almost at an end, Asselstine says he intends to keep wrestling with the Golden Bears club and has sights set on qualifying for the 2020 Tokyo Olympics, after which he’d like to contribute his talents as a coach. He’s also keen on embarking on his teaching career, a passion that’s been strengthened by the support he’s enjoyed from his teachers over the years, and by his own experience coaching young wrestlers over the past decade.

“Growing up, I had lots of teachers take extra time to help me with certain things, so it’s not only something I like to do—I feel like I need to give back, because so many people have given so much to me.”