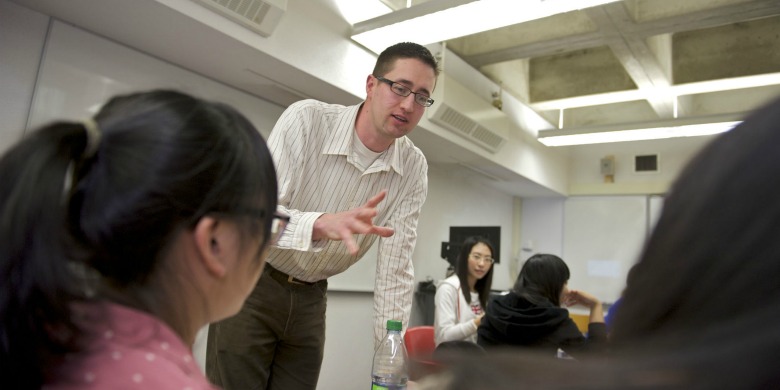 (Edmonton) Jonathan Gordon attributes the shift in his teaching approach to a workshop he attended a few years ago on “contract teaching.”

What that means is that no grades in a course are assigned during the term—only constructive feedback and encouragement. Under the terms of the contract, the students are responsible for delivering a number of assignments and participating in mentoring sessions.

For writing instruction, says Gordon—a recipient of the 2012 William Hardy Alexander Award for Excellence in Undergraduate Teaching who teaches Writing Studies 101 through the arts faculty’s Office of Interdisciplinary Studies—the contract approach has proven overwhelmingly successful. It aims to move beyond the fear of failure, refusing to give voice to that scathing internal editor that can stifle creativity and clear thinking.

In other words, it fosters constructive critique rather than negative criticism.

“There is occasionally some concern from some students in the class about how they are doing, and how it will affect their GPA, but I think the benefits definitely outweigh the disadvantages,” he says.

One benefit is escaping “the trap of students trying to give the instructor what they think they want [rather than writing for an audience]. They end up scared of trying out new things for fear of getting a bad mark. Not grading takes some of that pressure off.”

First introduced in 2007, Writing Studies 101 is open to any student on campus to fulfil three required English credits. The course covers the fundamentals such as the mechanics of writing, grammar and essay structure, but it also introduces students to the role writing plays in learning, discovering, thinking critically and connecting with an audience.

The class size is capped at 20, and students also participate in small mentoring sessions with the instructor, says Gordon, where they have more opportunity to explore writing at a deeper level.

A single grade is finally assigned to each student after they submit a portfolio of writing at the end of term, by which time the vast majority report having successfully moved beyond their fears. Most respond in the affirmative to the following survey question: Do you know strategies for giving descriptive feedback about content, structure, ideas or rhetorical appeals in a piece of writing—that is, alternatives to feedback that focuses primarily on inadequacies or surface errors?

“These students are recognizing that the skills necessary in English and writing courses are beneficial in other facets of their academic lives and beyond,” says Gordon.

“A problem that I had before was justifying grades, and a lot of my feedback became about that. I always felt I lost some of the students after the first essay. It even happened with some of the top students—if they get an A, they think, ‘Well, this is a cakewalk.’”

Deflecting praise, Gordon modestly attributes his teaching award to the success of Writing Studies 101 itself. But Betsy Sargent, interim director of the program, has a different take.

“Jon has played a truly remarkable role in helping to establish Writing Studies 101 as one of the most sought-after courses on campus,” she says. “He’s a perspicacious commenter on student writing, able to encourage students while simultaneously challenging them to do their best work. Over and over again, students emphasize his gift for respectful dialogue.

“U of A students are perceptive, I think, in valuing an educator who does not seek the limelight, who doesn’t win them over with charismatic showmanship but instead by unrelenting, shrewd attention to their work.”