Writing the stories of people on the margins 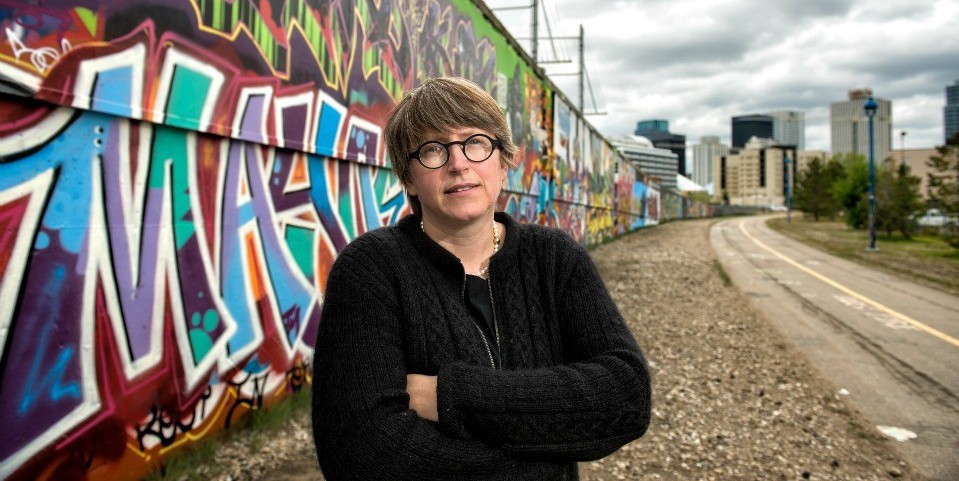 (Edmonton) Vera Caine can trace her interests in narrative research and marginalized populations to her upbringing in rural Germany, especially Sunday lunches around the kitchen table. It was during this time—a period that saw large numbers of refugees arrive in the country—that Caine was surrounded by family members who embraced marginalized populations.

“When I was young, my aunt worked at a home for refugee women that provided integration into German society,” says Caine, “and she would often visit our house and bring some of the women along with her to stay the weekend, and we became a large extended family. As a child I was fascinated by their experiences, but also puzzled by their silences and the stories I only heard in fragments.”

Sunday became her favourite day of the week as lunch was a place to discuss political and social issues. “Once those conversations were finished,” says Caine, “we would all move to my other aunt’s house for supper. During that meal my uncles, who had been part of the war and experienced prison camps in Russia, would talk about shaping the future of a democratic Germany in often very political ways.”

Although children in the family weren’t asked for their opinions, Caine found these conversations captivating. And as she grew, so too did her curiosity about people who often lived on the margins. At the same time, she too began to resist the many social norms that came with growing up in a small rural town.

With a laugh she notes that, as an adolescent, she had a lot of experiences her mother still refers to as “very troublesome.”

“I remember running away from home, and even then I was always trying to look out for people who I felt were disadvantaged. I would skip school and spend hours sitting and talking with people who were homeless—listening to their fascinating stories.”

Caine, now an associate professor with the Faculty of Nursing, still finds herself in ongoing conversations with members of marginalized populations, such as Aboriginal Peoples, illicit drug users, people living with HIV and homeless people.

Upon her arrival to Canada in 1991, she found herself troubled by the then-occurring Oka Crisis. “The international picture of Canadians is just such a different one,” says Caine. “I knew that I had an obligation to learn about indigenous history and about the relationships between indigenous and non-indigenous people. And even today, while it’s not always easy, in many ways that promise has continued to consciously push into my research.”

Despite challenges, Caine has been successful on her research journey thus far. She recently received an Early Career Award from the Narrative Special Interest Group of the American Educational Research Association, a national research society. The award recognizes scholars who have conducted a distinguished program of cumulative educational research within the first decade after earning their doctoral degree.

Although narrative inquiry has been a popular research methodology in fields like sociology and education studies for decades, only recently has it gained more footing in nursing. Perhaps the most powerful aspect of this kind of research is that it changes those involved in a very personal way.

In a sombre tone, Caine talks of how the disappearance of one of her research participants pushed her to be always aware of her role in sharing these stories and experiences. More than a decade after the disappearance, Caine learned that her participant had been murdered—bones strewn across a desolate area.

Even after all of these years, Caine misses her terribly. “Her absence called forth many questions for me. What responsibility do I have in carrying her story? How do I attend to my ethical responsibilities to her as a mother, lover and woman? I often think about those questions and wonder what my role is in them. As a researcher, how do we attend to others who are part of the lives we hear about?”

It is one of the experiences that continue to shape Caine’s understanding of how deeply people’s lives and health are shaped by inequities.

“I’m always surprised,” says Caine. “I’m surprised by the hardships people have had and that they are able to go on laughing, because I have no idea how I would do the same. I’m sometimes surprised by the continuous and deep ignorance and arrogance that comes from many different places, whether it’s care providers or within families, that is shown to marginalized populations.”

As a researcher, Caine knows she’s privileged to have people share their experiences with her—in fact, one of her first research participants, Tammy, has become a close friend and mentor.

“Over the course of our relationship, Tammy has given birth to three children,” says Caine. “As a mother who is living with HIV and substance use, Tammy has encountered multiple barriers to accessing care that is relevant, ethical and meaningful.”

Caine says Tammy’s experiences have taught her a lot and have led to further research in the area of HIV nursing care and, more recently, to her work alongside mothers who are HIV-positive or at risk for HIV.

She notes that Tammy has changed much in her life in more recent years; her ability to challenge obstacles and to face life with a deep joy provided Caine with important and continued reminders never to tell only a single story.

“Tammy is part of our family,” says Caine. “Our son refers to her as Auntie Tammy, and I too have become part of her three children’s lives. Tammy reminds me that I have long-term relational responsibilities and what it means to live a continuous commitment to people who have touched us deeply.”

As part of these long-term responsibilities, Caine is helping to train the next generation of researchers who will continue to tell the stories of marginalized populations.

Her contagious passion for narrative research has spurred nearly all of her graduate students to pursue the field. “Working with students is very rejuvenating and sustaining; it’s one of the best parts of my work,” says Caine, who supervises a number of graduate students from different disciplines. “I hear people say all the time, ‘I want to do international work,’ and I think to myself, I get to do that from my office! I have many international students and I get to travel, quite metaphorically, to Ghana, Kenya, Japan, Australia and so on, every day.”

She finds her “metaphorical travel” an interesting lens that adds another layer of complexity to research, both in how the work is done and where it’s situated. “By building a sense of community between the students, we all start to realize that our positions aren’t unique, or the only one, which creates a constant adjustment in our thinking.”

Caine believes that, as researchers, one of the main things her students need to understand is that knowledge is relational and it is never fixed. “We have to explore the person’s ongoing experiences in a situation, but also explore our own experiences as nurses. It’s important to question our experience in relation to the people we provide care for, as it completely shifts us away from a centric thinking.”

For example, her students have learned through discussions with one another that homelessness is viewed very differently around the globe. “By talking about our own experiences, we’re really able to get a sense of how policies impact care, how care arrangements are actually different for nurses in diverse geographic places and how nurses are involved.”

Reflecting on her career to this point, Caine says she couldn’t be happier with the experiences and opportunities she’s had. “My journey to this point has been fascinating, and the experiences I’ve been invited take part in are an extraordinary privilege, wherever I go.”

“I have had many wonderful mentors over the years; however, the most significant influences remain people like Tammy and other research participants.”

Writing the stories of people on the margins