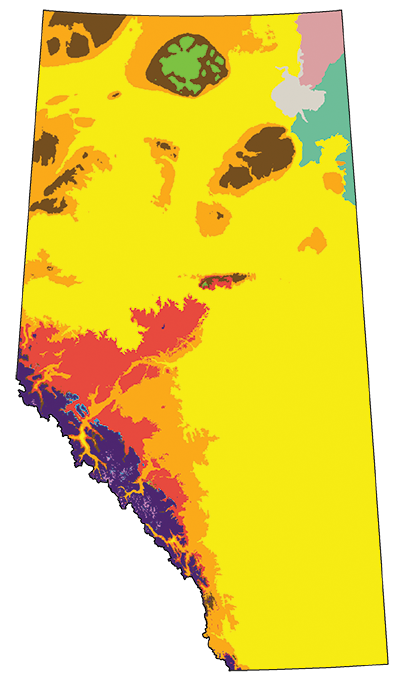 Check our Schneider's maps showing the projected impact of climate change on Alberta's landscapes at https-::www.ualberta.ca:newtrail:mapping-the-future

You may want to rethink that escape route

Does your zombie apocalypse plan factor in climate change?

By SARAH PRATT and MATT REA

It's coffee break at a UAlberta presentation on the impact of climate change on Alberta’s biodiversity. Researchers visit and chat between bites of mini muffins. You don't know anyone so you sit and think about what you've heard.

Over the course of the morning, you’ve learned about vulnerable species, invasive plants and climate projections for the end of the century. One of the speakers is Richard Schneider, a research associate in the university’s Department of Biological Sciences, who’s part of a project led by the Alberta Biodiversity Monitoring Institute. Using past climate change data and predictions of future rates of change, Schneider has created maps showing dramatic changes to Alberta’s ecosystems by 2100.

The information is compelling and relevant — and a bit unnerving. The climate will be warmer and drier. Boreal ecosystems will shrink to pockets of forest, replaced by swaths of parkland and grassland. That means more open spaces. Less cover. Less protection … protection from the elements ...

The researchers won’t say it, but you know the truth: zombies are coming. And if there’s a global zombie infestation and ravaged cities are overtaken by the undead and laws are meaningless and you’re forced to find food and shelter in rural areas —areas changed by global warming ­— where will you go?

Imagine a global zombie infestation in the year 2100, when Schneider's map shows a hotter, drier Alberta covered mostly in grasslands …

It has been 22 days of madness. You foresaw the signs. You knew what was coming long before those fat cats in Ottawa would admit it. The zombies are here, and they’re not going away. As you look out over the river valley, you see nothing but burning buildings and streams of staggering walkers. The city belongs to the dead now. Time to get out while the getting is good.

Your first thought is to head to the bountiful boreal forest in northern Alberta and live in the treetops like an Ewok. Zeds can’t climb, after all. You figure dense bogs and protruding tree roots might slow down old uncle Z. You also figure there will be plenty of spots to hide and wait this thing out. You could live off the land; you could survive off wild game and moisture. Wait for civilization to rebuild itself.

You’re heading toward Fort McMurray, walking and walking through fields of grasses … but something’s not right. Where is the boreal forest? A 2015 Alberta ecosystem map in your ragtag pouch of supplies shows that you should be surrounded by trees. All you see is grassland. When the forest finally appears, it's a lot smaller than you expected, and the ground is hard and covered with dead leaves and dry branches. To make matters worse, it would seem you’re not the only one thinking like an Ewok: so many people had the same idea that the shrunken forest is bursting with zombie bait. Meat for the slaughter, you mutter. Time to move on.

The map shows parkland to the south, so you’ve been heading toward central Alberta. There should be places to hide. Parkland ecosystems offer woodland, wetlands, crops and grassland, plentiful wildlife and sources of fresh water. You feel optimistic. You walk through what should be parkland, but there’s grassland as far as you can see. You keep trudging. Finally, you reach a small patch of parkland but it has become much too dry for crops, and other escapees have colonized the few remaining wooded areas. Your plan is unravelling at an alarming rate.

You need to think differently. Maybe find somewhere more raw and untouched. The mountains? Bears might take care of the zombies. But then again, they might take care of you. And then there are the icefields and crevasses … You don’t fancy the idea of cutting off your hand with a pocket knife like that guy in the movie 127 Hours, whose arm was trapped beneath a boulder in a Utah canyon.

Think! How about the foothills on the edge of the Rockies? It may be a relatively small ecosystem, but there are forests, fields, bushes, lakes and plenty of animals such as elk, game birds and fish. Hills would be tough terrain for those shambling corpses, and you could find high points to watch for swarms. There’d be enough trees to create a safe shelter, and chinooks would create winter weather oases. To the foothills!

Standing in a patch of dry prairie sage on a barren hump of land in what should have been the foothills, you are still looking for the abundant bushes, lakes and game. You realize the 2015 map isn’t helping. Too much has changed. The foothills flora and fauna are gone, replaced by fescue and mixed seasonal grasses that thrive in  warmer, drier conditions. Nowhere to hide here.

After days of travel and tension, your sanity starts to slip. You debate with a gopher over the finer points of spelunking. You befriend a sedimentary rock whose windswept folds resemble Donald Trump. Assessing your situation, you recall an old tune and burst into song: “Grasses to the left of me, zombies to the right, here I am, stuck in the foothills fescue.” You laugh maniacally.

Your sanity returns, only to confront cold reality. No shelter. Nowhere to hide. Once upon a time, there would have been creeks and ravines that could have sustained you. But not any more. Your only solace is that at least you’ll see death coming. You fashion a shovel out of two old femurs and a skull. You build a sod hut, start a makeshift invasive plant garden and dig a trench around your sod-mansion to keep the walkers at bay. Your plan had been to live like a nomad, roaming the forest and gathering food. Yet here you are: the last farmer in Alberta.

“It’s almost dusk but I can see them. They’ve been piling up in my trench for weeks now. Soon there will be a writhing bridge of moaning, rotting flesh — a clear path for the dead to cross. I always thought I would survive this. I thought I was smarter than everyone. I scoured the maps to find the best terrain for escape, certain I could outlast the zombies. Now I know how wrong I was. I’ve made peace with my demise. My mistake was that I planned for only one apocalypse.

“I didn’t expect there would be two.”

On a more serious note — though, really, what could be more serious than a zombie infestation? — see Richard Schneider’s maps and learn more about the predicted effects of climate change in Alberta.

You may want to rethink that escape route