Department of Family Medicine research team sheds light on young carers in Canada and their need for community support. 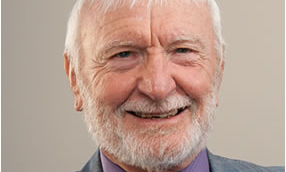 Earle Waugh and other Department of Family Medicine researchers have gathered important insights into the challenges facing young caregivers in Canada.

As director of the Centre for Health and Culture in the Department of Family Medicine, Earle Waugh has become familiar with many diverse groups and communities. However, during his work with the Alberta Caregivers Association he found a group he and most Albertans had never heard of—young carers.

Young carers are young people who take on substantial caring responsibilities for family members and significant others in their homes with chronic illness, disability, mental health issues or substance abuse problems. The support they provide ranges from assistance with walking to personal care, such as bathing and toileting.

Discovering this group of young people spurred Waugh on to find out more about the impact that caregiving at an early age had on their lives. How prevalent are young carers in Canada and Alberta? How do they feel about the roles they play in their families? Perhaps most important, what kind of support is available for them? With these questions in mind, Waugh joined forces with Olga Szafran, assistant director of research in the Department of Family Medicine, and researchers Kimberly Duerkson, Jacqueline Torti, Grant Charles and Janki Shankar. Together they investigated the experience as recalled by former young carers. They also explored the perspectives of community agencies on issues related to young carers in the Edmonton area. The results of their work, published in the Canadian Journal of Family and Youth—“Is There a Care Gap for Young Carers in Canada?” and “Former Young Caregivers Reflect on Their Caregiving Experiences”—reveal a compelling story of an overlooked group of young people in need of recognition and support.

The role of the young carer may have short-term negative impacts including absences from school, stress, exhaustion and social isolation. Documented long-term impacts include delaying education or leaving school entirely, as well as suffering from limited confidence and depression. In an effort to understand whether young carers in Edmonton had similar experiences, the researchers interviewed a small group of former young carers. The results revealed impacts that echo those documented, as well as the fact that the experience of caregiving at an early age can affect a person’s life well into adulthood. The interviews also revealed a desire to keep their situation a secret for fear of external influence: the desire to keep the family together provides strong incentive for young carers to quietly shoulder responsibilities far beyond what is normally acceptable for children.

Unfortunately, this strong desire to keep the family intact actually prevents young carers from seeking the help and support they need. Szafran notes that there is some awareness of young carers in their immediate communities and some informal support is provided, but the formal support available from social agencies that could be most beneficial is perceived as threatening. The idea of speaking with people in a position to help—teachers, counsellors, family physicians or police—brings uncertainty because of the perception that disclosure could result in children being taken from the home, thus breaking up the family. However, even if the mistrust of social agencies can be overcome, no agency currently has the mandate, knowledge or resources to provide support.

What can be done?

Discussions with community agencies in Edmonton revealed a lack of awareness or recognition of young carers, a lack of community support and a need for policy development relevant to this group. The first step in addressing the issue is increasing awareness about this population struggling to cope and in need of resources, starting with more in-depth investigation of the prevalence of young carers in Canada. “There must be more research generating recognition and creating a desire to address the issue; that is ideal,” says Szafran.

Once the extent of the situation is known and the dilemma faced by these young people is acknowledged, Waugh advocates a cross-cultural assistance model to help with this group, providing support to stay and succeed in school, basic life skills such as cooking and cleaning, and services like counselling and respite care.

Young carers may not be a high-profile population, but they aren’t going away. In fact, they are likely to increase in number. “This study indicates a major care gap for young carers,” says Waugh. “It lays the foundation for more in-depth research on the social and cultural needs of young people who provide supportive care for a family member.”

“We would hope that community agencies and policy-makers would undertake this activity for a group that are invisible and unrecognized, and that appear to lack consistent support.”