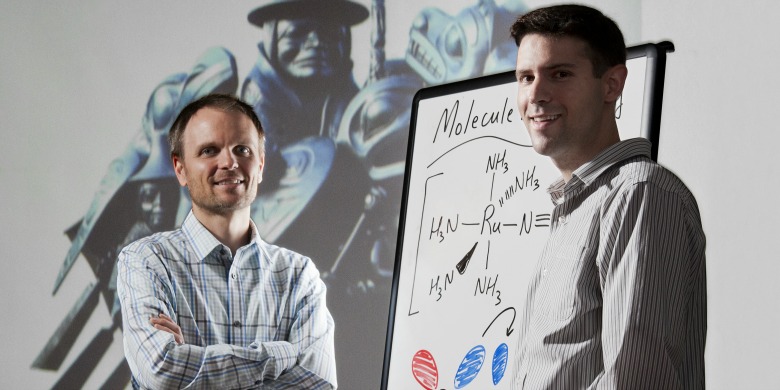 120924-rivardadams-banner
Eric Adams (left) and Eric Rivard are this year's winners of the Provost's Award for Early Achievement of Excellence in Undergraduate Teaching. (Image: John Ulan)

(Edmonton) In this age of Google, Wikipedia and instant answers, standing in front of a classroom to teach is not an easy feat.

“I have to be more interesting than Facebook; that’s a challenge professors are starting to grapple with,” noted Eric Adams, an associate professor in the Faculty of Law at the University of Alberta.

Adams and Eric Rivard, both budding educators at the U of A, know this well, but their energy and dedication have won the hearts and minds of their students—at least enough, they hope, to keep the students from checking their emails during class.

Adams and Rivard, an assistant professor of chemistry in the Faculty of Science, are this year’s winners of the Provost’s Award for Early Achievement of Excellence in Undergraduate Teaching.

The pair are among outstanding faculty, staff and students being honoured at the annual Celebrate! Teaching, Learning and Research event being held Sept. 27.

Both men strive to link their classroom teachings to real-life concepts. For Adams, who teaches about the sometimes dry twists and turns of constitutional law, it means pushing his students to think for themselves, and not rush to the Internet for a quick answer.

“There are no Google answers in law, and for many students that is a struggle. Law school is not a matter of memorizing, it is about critical thinking.” Adams became fascinated with constitutional law as a teenager as the Meech Lake Accord was being debated in the late 1980s. “My parents thought I was nuts; what teenager would be interested in this?” They predicted he’d become a lawyer, which he did after graduating from Dalhousie Law School in 2001. He practised law in Toronto before joining the U of A in 2007 as an assistant professor.

Twenty-five years after Meech Lake, Adams is still fascinated with how the law, politics and Canadian culture intersect. “The world of academia gives me the time and space to pursue those questions.” He shares that passion with his students in ways that pique their interest, using, for instance, photos of Jackson Pollock paintings to lead discussion about abstract legal theory. Or using an image of a Haida sculpture as a launching point for a unit on Aboriginal rights.

“It’s a way to humanize and visualize a concept to engage students,” Adams said.

Tweaking the thought process is also top of mind for Rivard, who joined the U of A in 2008. One of his favourite ways to start off a class is by showing a “molecule of the day,” paired with the tale of how it came to be. Who can resist a lesson about how the element phosphorus was isolated by boiling down urine?

“There’s always a story behind discovery. And now they have a story to relate to the chemical principle involved.”

By tingeing his classes with fun, Rivard draws students out, getting them to yell out answers as he “slows the world down” by using a whiteboard instead of PowerPoint so they follow along as he writes out formulas. “Teaching is not a static, one-way process. I try to create an environment in which students are not afraid to be inquisitive.”

He loves sharing the magic of chemistry, noting that his field of expertise—synthetic chemistry—is anything but dry. “Molecules are often built from the ground up, and there’s an art to that.”

Passion for their work and self-confidence are what both young professors hope to leave with their students.

“The key to a happy career in law or anything else is an enthusiasm for the material, and that has to be discovered in the material you come across, so I encourage my students to find that set of concepts in law that excites them,” Adams said.

For Rivard, the payoff is in seeing confidence levels grow.

“I see the change over four years of undergraduate school. By the end, they can see themselves as scientists at the PhD level. It’s beautiful to see their confidence progress that way.”

He adds: “Teaching is the most enjoyable hour of my workday.”

Adams and Rivard both draw inspiration as teachers from their students and from fellow professors in the U of A community.

“As a new teacher I was immediately folded into a culture of good teaching, the belief that what goes on in the classroom is critical to the success of the faculty,” Adams said.

And it’s hard not to be energized by the students, Rivard said. “Students at the U of A are going to be world leaders, they are that amazing. They can compete with any school in the world.”

Everyone is invited to attend the Celebrate! Teaching, Learning and Research event, which begins at 4 p.m. Sept. 27 in the Myer Horowitz Theatre. There is no cost to attend, but please RSVP to the Academic Awards and Ceremonies Office at 780-492-2449.