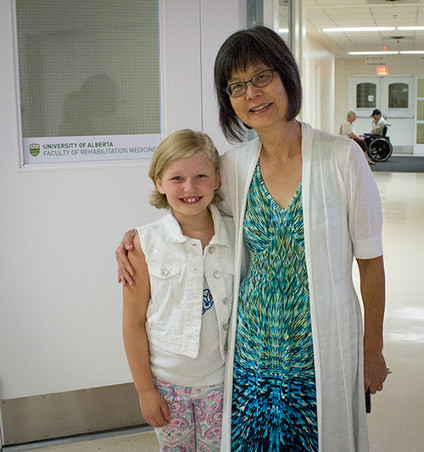 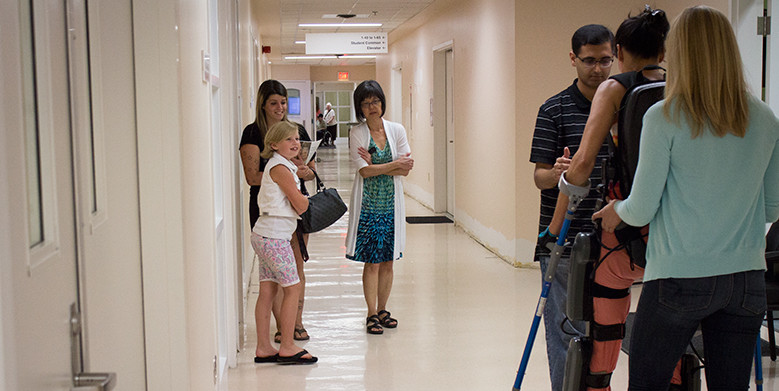 Eight-year-old Cadence Kube and her mom Sarah Clements (left) watch as a study participant with a spinal cord injury walks through the corridors of Corbett Hall using a ReWalk robotic exoskeleton.

(Edmonton) What do regular eight-year-olds typically do over their summer holidays? Bike riding, swimming and playing with friends come to mind. But philanthropy? Probably not.

For Cadence Kube, giving back to the community and helping people has always been a passion. After learning about an accident that left her mother’s friend unable to walk, Cadence knew just what to do.

“When I found out what happened to Gerry, I wanted to find a way to help and support him and thought it was a good idea to raise money,” recalls Cadence, who has launched a crowdfunding campaign for spinal cord research at the University of Alberta.

Gerry Kress, a close family friend to Cadence and her mother, Sarah Clements, suffered a spinal cord injury in his early twenties after he broke his neck playing hockey. The accident happened when Kress went headfirst into the boards, leaving him with quadriplegia. During surgery, doctors had to remove pieces of his hip bone to replace the broken pieces in his neck in order to rebuild it.

Today, Kress relies on his resourcefulness to build and design tools to suit his needs. With the help of a carpenter, he was able to design a lift for his previous home.

“He recently moved into a new condo, which he has tweaked with his own creativity,” explains Clements. “For example, with his stand-up washer and dryer, he uses a special stick to get his clothes in and out despite the height. He also customized his truck in a way that doesn’t require him to use a lift.”

Touring the Faculty of Rehabilitation Medicine

To gain a better understanding of spinal cord injuries and how to help people like Kress, Cadence recently paid a visit to the Faculty of Rehabilitation Medicine at the U of A. Her eyes lit up with excitement as she walked through the corridors of Corbett Hall, soaking in all the information she could get.

Jaynie Yang, a professor in the Department of Physical Therapy, had the pleasure of sharing information about her research and investigating how the ReWalk exoskeleton affects the body long-term in users with spinal cord injuries. Cadence even had the opportunity to see the device in action.

“Cool!” Cadence said after witnessing a wheelchair user stand up and walk using the ReWalk. It was a common word used throughout the afternoon. The more she learned, the more she was intrigued, the more she wanted to reach her fundraising goal.

“I am very impressed with Cadence and her desire to help,” says Yang. “Everyone can help raise awareness of spinal cord injuries and research, no matter how young.”

The funds raised will assist with day-to-day purchase of supplies for training or testing of participants and other activities related to Yang’s spinal cord research.

Clements created the crowdfunding page for Cadence to track her fundraising efforts and monitor her goal of raising $1,000. And along with raising money for spinal cord research, Cadence has also donated her hair to Angel Hair for Kids for children with cancer.

“A lot of little girls and boys with cancer don’t have hair. I thought, if I didn’t have hair, I wouldn’t be very happy,” says Cadence. “So I decided I wanted to grow my hair out and donate it to Angel Hair for Kids.”

“Growing her hair out and donating it was something Cadence has always wanted to do. She thought it was a great opportunity to do it at the same time as the crowdfunding campaign,” explains Clements. “I am 100 per cent supportive of Cadence. She has so much passion for helping others.” 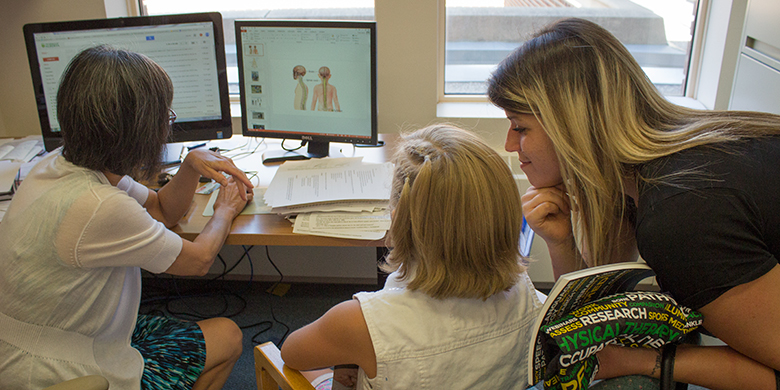 For Cadence, helping others doesn’t end with people. Back in July, during a trip to Clearwater Marine Aquarium in Florida, she witnessed a turtle undergoing treatment after a bubble was discovered in its shell preventing it from swimming.

At that moment, Cadence decided she wanted to be a marine biologist when she grows up, to help rehabilitate injured sea animals and release them back to their habitat. It is apparent that Cadence has a desire to help others live normal, happy lives. The only difference is who the patients are.

Cadence has already donated her hair for Angel Hair for Kids and released a video showing the reveal. But the philanthropy won’t stop there. When asked about what she will do next, she says, “I want to take part in Homeless for a Night.”