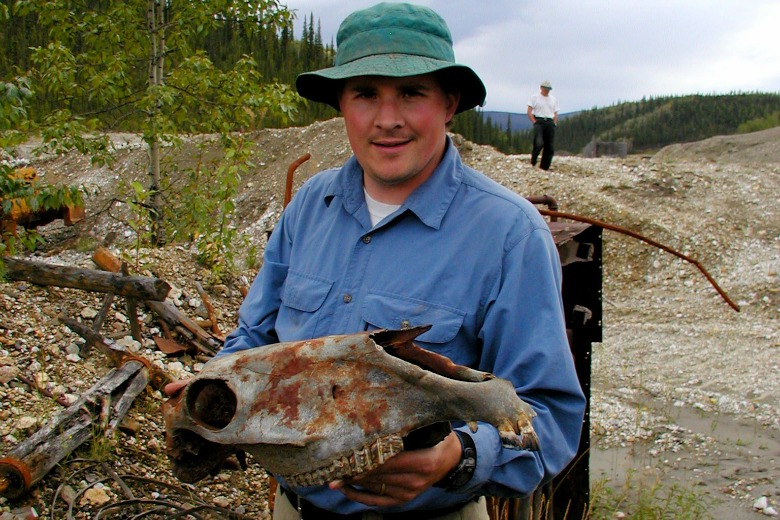 (Edmonton) When University of Alberta researcher Duane Froese found an unusually large horse fossil in the Yukon permafrost, he knew it was important. Now, in a new study published in the journal Nature, this fossil is rewriting the story of equine evolution as the ancient horse has its genome sequenced.

Froese, a researcher in the Department of Earth and Atmospheric Sciences and Canada Research Chair in Northern Environmental Change at the U of A, had spent years visiting Yukon placer gold mining exposures to understand the permafrost and the ice age environments that supported megafauna including mammoths, horses and bison.

Unlike the small ice age horse fossils that are common across the unglaciated areas of the Yukon, Alaska and Siberia that date to the last hundred thousand years, this fossil was at least the size of a modern domestic horse. Froese had seen these large horses only a few times at geologically much older sites in the region—but none were so remarkably well preserved in permafrost.

Froese and his colleagues had dated the permafrost at the site from volcanic ashes in the deposits and knew that it was about 700,000 years old—representing some of the oldest known ice in the northern hemisphere. They also knew the fossil was similarly old.

On a hunch, the team extracted collagen from the fossil and found it had preserved blood proteins and that short fragments of ancient DNA were present within the bone. The DNA showed that the horse fell outside the diversity of all modern and ancient horse DNA ever sequenced consistent with its geologic age. After several years of work, a draft genome of the horse was assembled and is providing new insight into the evolution of horses.

Yukon paleontologist Grant Zazula, a contributor to the study, showed that the horse fell within a line of horses that includes all modern horses and the last remaining truly wild horses, the Przewalski’s Horse from the Mongolian steppes. Zazula notes that the discovery of the fossil “is testament to the remarkable archive of natural history in Canadian permafrost.”

Also remarkable was that the ancient DNA survived so long. “It bends, if not breaks, the rules that govern DNA decay and pushes back the time in which DNA is recoverable by nearly an order of magnitude,” said Beth Shapiro, an evolutionary biologist and ancient DNA expert at the University of California, Santa Cruz, and collaborator in the study. “Had it not been frozen for the entire duration of that 700,000 years, I doubt that any recoverable DNA would have survived.”

This work, led by researchers from the University of Copenhagen, has revealed that the last common ancestor of all modern equids (including donkeys, horses and zebras) lived about 4 million to 4.5 million years ago—an evolutionary timeline reaching back twice as long as previously thought.

In addition, the new genomes revealed episodes of severe demographic fluctuations in horse populations in phase with major climatic changes, including severe losses in diversity during previous warm periods in the Arctic and when horses were domesticated.

The results also solved a long-standing mystery about the evolutionary origin of Przewalski’s Horse. This horse population—which shows striking physical differences from domesticated horses, including an extra pair of chromosomes—was discovered by the Western world in the second half of the nineteenth century and rapidly became threatened. It almost became extinct in the wild by the mid-1950s but survived after massive conservation efforts. The researchers revealed that the Przewalski’s Horse population was isolated from the lineage leading to present-day domesticated horses about 50,000 years ago. They also showed that pure Przewalski’s Horse lineages are still living today. This suggests that the Przewalski’s Horse is likely genetically viable and therefore worthy of conservation.