Zooming in on problem proteins

New infrastructure funding from CFI will help researchers team up against diseases caused by misfolding proteins. 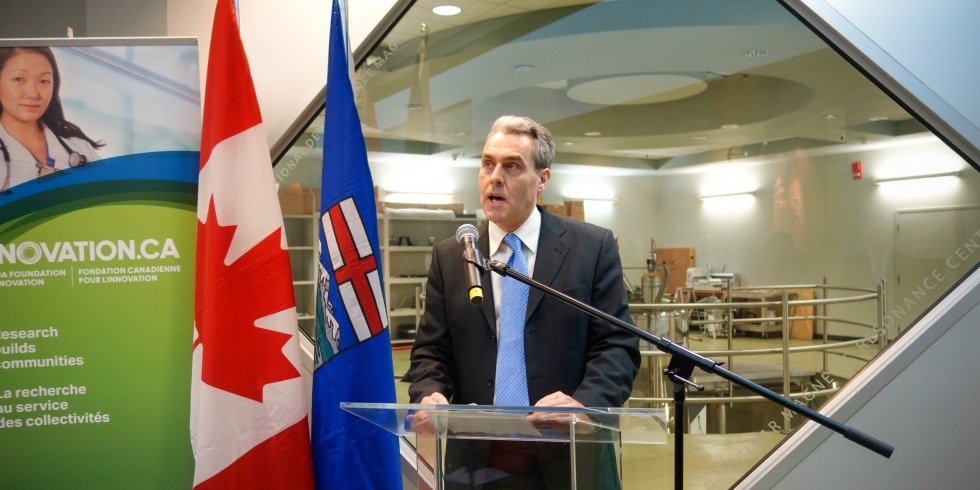 In 1999, the University of Alberta, led by biochemistry professor Brian Sykes, and its government partners opened the National High Field Nuclear Magnetic Resonance Centre, or NANUC—the only national nuclear magnetic resonance (NMR) spectroscopy centre in Western Canada at the time.

The task of using magnets to unlock the mysteries of how molecules and atoms behave and look in three-dimensional space was exceedingly complicated, but it held the promise of understanding and treating a litany of afflictions, from pneumonia and tuberculosis to cancer.

As the successes mounted, promises were fulfilled and applications multiplied, it became clear that the U of A’s leadership in NMR research stretched beyond Western Canada. Now, that leadership has been recognized thanks to an $800,000 grant from the Canada Foundation for Innovation’s (CFI) John R. Evans Leaders Fund.

“This is step one of a strategy that we’re working on with the province and the university to position Alberta as having the most innovative NMR facility in the world,” said Michael Overduin, researcher in the Department of Biochemistry and executive director of NANUC.

This round of funding will equip NANUC with an 800 megahertz NMR system.

As one of the researchers who will make use of new CFI-funded infrastructure, Overduin will use the new spectroscopy to zoom in on the atomic behaviour of misfolding proteins that drive cancer progression and infection, and result in illnesses such as cancer, heart disease and infection. He says that, by tracking how disease-linked proteins bind biological and drug-like molecules, he hopes to design new therapeutic agents that selectively combat conditions lacking effective treatments.

“We will have the best probes to see the protein signals; we will be able to see the frequencies of the atoms within the proteins with outstanding resolution and sensitivity,” said Overduin. “We have about 20 groups on campus who are using MNR spectroscopy and they come from across the university. There is strength in chemistry, biological sciences, medicine, pharmacy—everyone is welcome to use this. We are very collaborative and see NANUC as a central facility for Alberta and for the university.”

Overduin—whose team recently published research identifying how proteins that join skin and muscle cells also connect the skeleton within the cell, a critical junction that’s lost in people with skin-blistering diseases and those who suffer from cardiomyopathy, which causes sudden death—says another piece of the U of A’s NMR leadership comes with the launch of DiscoveryLab, a virtual lab designed for collaborative drug discovery research.

“DiscoveryLab exists to discover how proteins involved in disease work, what they look like and how to stop them from misbehaving,” said Overduin. “It is a forum for finding new ways to work together with academics across the spectrum as well as industry and business that would like to work in partnership with academia in the area of drug discovery.”

At the infrastrustructure funding announcement held at the U of A March 14, Kirsty Duncan, federal minister of science, announced more than $23 million in funding for 95 projects at 26 universities across Canada. All told, nine U of A researchers received more than $2 million from CFI.

"The University of Alberta is home to some of the world’s brightest minds and most advanced research infrastructure,” said U of A President David Turpin. “The knowledge, discoveries and innovations that result are helping shape the future and improve the lives of Canadians and people around the world. With this new CFI funding we will expand and further strengthen our research capacity in a number of diverse areas, and continue developing the knowledge, technology and innovations needed to address some of the world’s most pressing issues. On behalf of the university, I thank CFI and the Government of Canada for their ongoing generous support, and congratulate our nine researchers and their respective team members on their funding success in this national competition."

Other CFI-funded projects at UAlberta

Zooming in on problem proteins
Newsroom