'A place to dream of what’s possible': Thelma Chalifoux Hall residence opens at U of A 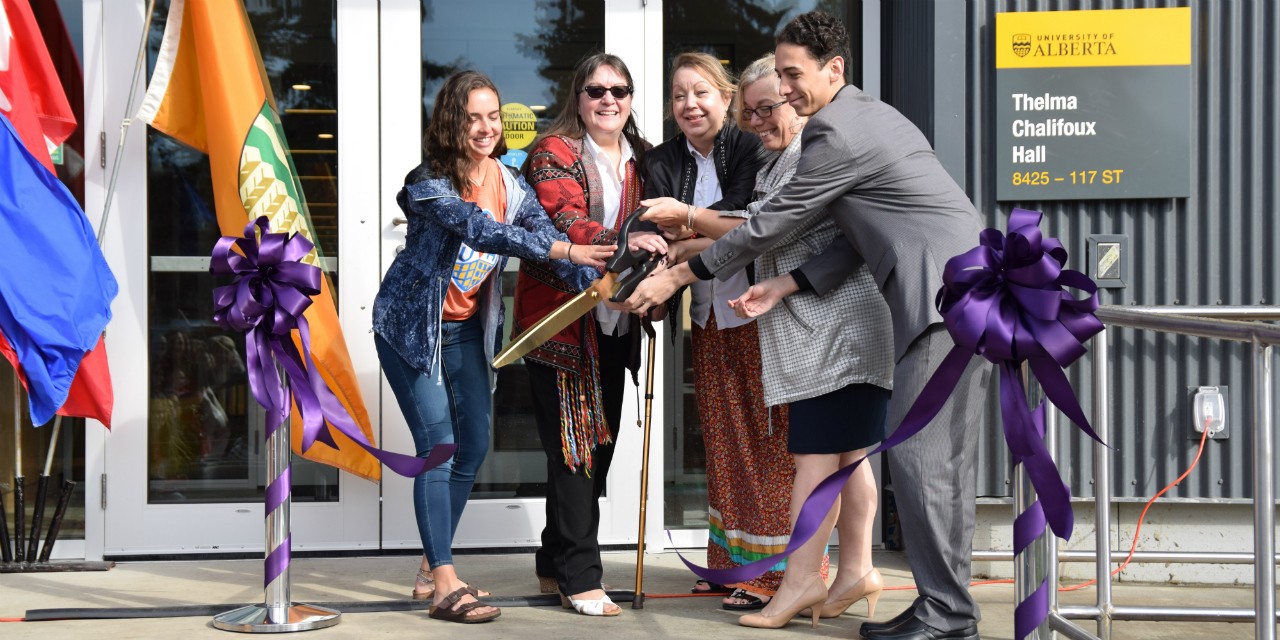 Three generations of the late Métis activist and former Canadian senator Thelma Chalifoux’s family were on hand to celebrate the opening of the University of Alberta’s newest residence earlier today.

Daughters Debbie Coulter and Sharon Morin, as well as granddaughter Ava Coulter and great-granddaughter Chyana Deschamps, all spoke at the grand opening of the new 461-space Thelma Chalifoux Hall, but it was a granddaughter who couldn’t attend the ceremony who explained what the naming would have meant to Chalifoux.

“When I heard students chose my grandma as the namesake of a hall for first-year students, I thought how appropriate and beautiful that was,” said Debbie Coulter, who read aloud a letter her daughter Rheanna Sand wrote. “I hope that Thelma Chalifoux Hall is a place where new students can feel at home, find friendship and a quiet place to reflect and dream of what’s possible. She would want all new students to remember their roots but to move forward and rise to the challenge that first year. After that, the future awaits.”

Sand, who completed her PhD at the U of A in 2012 and is now a neuroscience research fellow at Harvard University, recalled how crucial her grandmother’s support had been during her early days at the U of A.

Chalifoux’s daughter Sharon Morin presented student representatives with a Métis flag, Métis sash and portrait of Chalifoux that will adorn the common area on the main floor, along with a plaque detailing Chalifoux’s life and accomplishments.

“We have a big family and we could probably fill two of the floors here with everybody,” Morin said. “But my mum also had lots of ‘might as well be’ kids. There were lots of kids who called her grandma or auntie or kookum. And these [students] will also be her ‘might as well be’ kids, so we’ll embrace them and welcome them the way mum did.”

Granddaughter Ava Coulter enumerated Calgary-born Chalifoux’s many contributions to the well-being of Métis and First Nations peoples, and all Canadians, including her time serving in the U of A senate in the 1970s, and her service as a Canadian senator from 1997 to 2004. After she retired from the Canadian Senate, she founded St. Albert’s Michif Cultural Connections, an organization dedicated to Métis culture. She passed away in September 2017.

“In searching for a name for the newest residence, it was important to choose one that would inspire students to do great things, that recognizes the U of A’s support for the work of reconciliation, has a connection to the university and demonstrates diversity,” said Andrew Sharman, vice-president of facilities and operations. “Everyone agreed that Thelma Chalifoux embodies these values.”

Chalifoux’s great-granddaughter Chyana Deschamps, currently pursuing her bachelor of arts degree at the U of A, also spoke at the opening.

Thelma Chalifoux Hall, part of the Lister residence complex, opened to student residents earlier this week along with Nîpîsy House, a new residence in East Campus Village that will create a further 300 student spaces. The new residences have helped the U of A meet its commitment to providing on-campus accommodations for all first-year undergraduate students who apply. More than 5,000 students moved into campus residences on Aug. 27.

'A place to dream of what’s possible': Thelma Chalifoux Hall residence opens at U of A