Digital technology and traditional Cree teachings come together in virtual tour of artwork at U of A downtown campus. 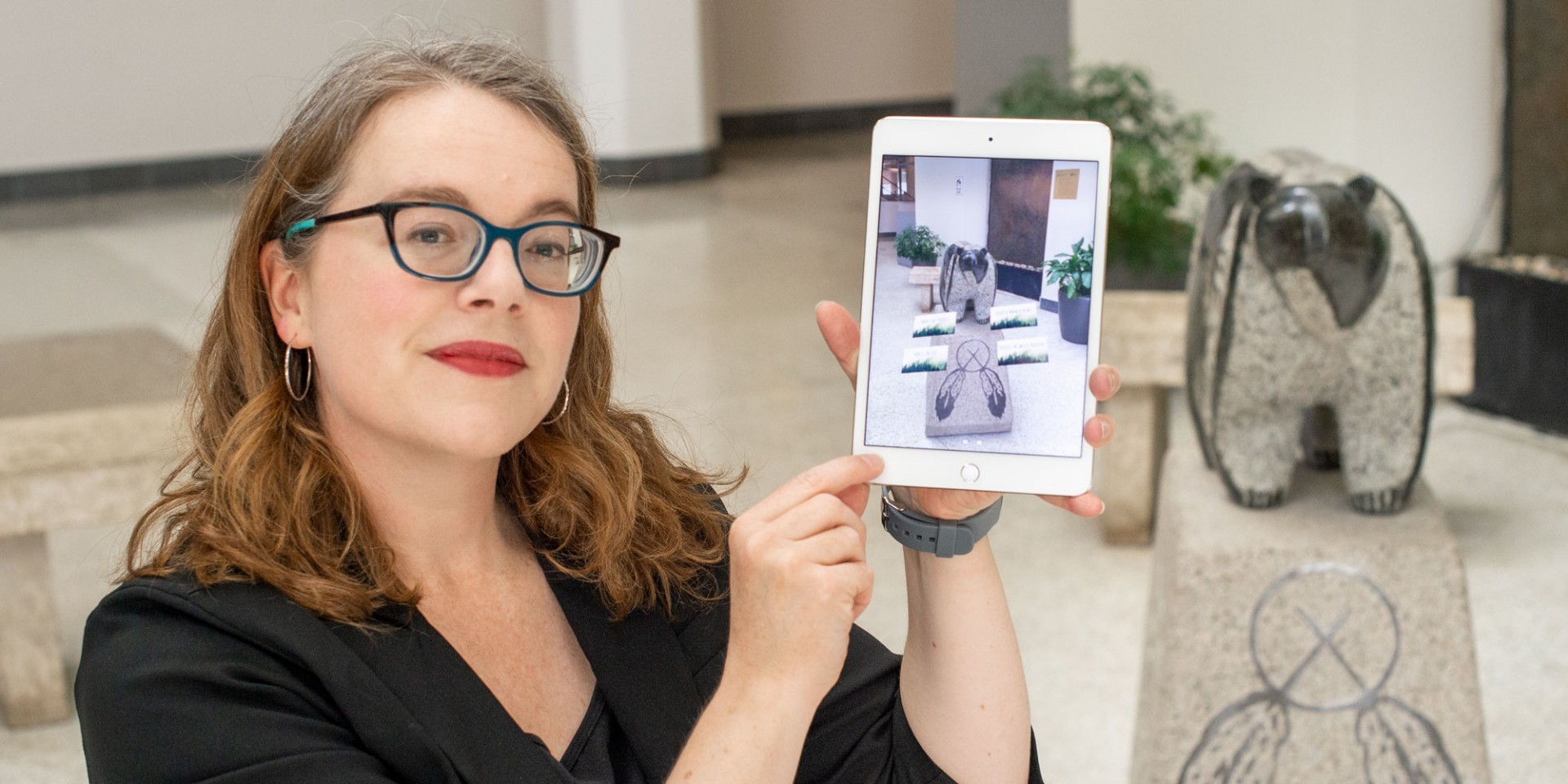 A new University of Alberta digital project is bringing Indigenous knowledge to campus and letting people connect on the spot with its teachings.

Using augmented reality, users can access videotaped pop-up stories by hovering their electronic devices over designated objects like the Sweetgrass Bear, a sculpture at Enterprise Square, the U of A’s downtown Edmonton campus.

Created by U of A graduate students and Indigenous knowledge keepers, the user-friendly initiative is rooted in Canada’s Truth and Reconciliation Commission, said project leader Rob McMahon, a Faculty of Extension researcher.

“One of the calls of action was to integrate Indigenous knowledge into teaching and learning, so we wanted to provide learners with opportunities to engage directly with members of Indigenous communities and knowledge keepers to tell their stories,” McMahon said.

“We thought augmented reality would be a fun way to do that. Along with encouraging engagement between the students and Indigenous representatives creating the stories, it invites users to interact with objects and is easy to use.”

The smooth granite bear sculpture, a Treaty 6 territory marker, is the first to be activated for the project. Images located on the sculpture’s various corners and curves trigger 13 short videos featuring Diana Steinhauer, an educator from Saddle Lake Cree Nation, or her cousin Stewart Steinhauer, who carved the bear.

“It shows Diana and Stewart telling the stories themselves; people who come and view the information hear it directly from the knowledge keepers,” McMahon said.

“People can appreciate the sculpture for what it is, but by putting words in the story through augmented reality, you can have this intimate exchange between viewers and our people who are revealing these truths. It’s a nice, collaborative way of moving the message forward, and it can be done on people’s own time.”

The videos, filmed by graduate students who worked closely with the Steinhauers to craft the stories, offer insight into the treaty relationship, as well as about the role of knowledge keepers and about the sculpture itself.

Each one provides “an oral worldview of our treaty relationship, which was created on Treaty 6 territory in 1876,” said Steinhauer.

“Current narrative about treaty is misaligned,” she noted. “It’s incumbent upon us to tell our side of the treaty, because only we know that. Our treaty partner and their descendants that have been on our lands need to be aware of the nature of this relationship forged between sovereign nations.”

Treaty is meant to bring everyone together to fulfil the vision of Turtle Island (North America), she added.

“The vision is that we are all related as a human family and therefore we need to come together to make a good place for everyone to have a place here.”

A series of handbooks was developed as an additional teaching resource “to help people navigate the process of creating stories in ethical and respectful ways,” said Amanda Almond, a master’s student in community engagement who helped write the guides.

“It’s not about extracting the stories, but sharing them. You’re doing the entire process together with the knowledge keepers,” she said.

The process can also be used beyond the classroom, like creating a visitors’ guide related to First Nations, such as a park with petroglyphs.

“We wanted to make it available so anyone can use it as a means to explore Indigenous-settler relations in a creative and collaborative way,” McMahon said.

The hope is to expand the app-driven storytelling to Steinhauer’s other bear sculptures located at the U of A’s north campus, Campus Saint-Jean and Augustana campus.

“Our main goal is to give people a framework that might encourage conversations about truth and reconciliation,” McMahon said.

“Once people know the truth, it will make an opportunity for real reconciliation to happen, so we can change the course of the future from a destructive path to a place where everybody can live a good life.”

Cree knowledge keeper Diana Steinhauer appears in a series of short videos created for the augmented-reality project, offering insight into treaty relationships and the deeper meanings of the Sweetgrass Bear sculpture at the U of A's Enterprise Square campus. (Video: Elliott Young)