How the James Bay Cree are finding an Indigenous solution to high rates of diabetes in their community. 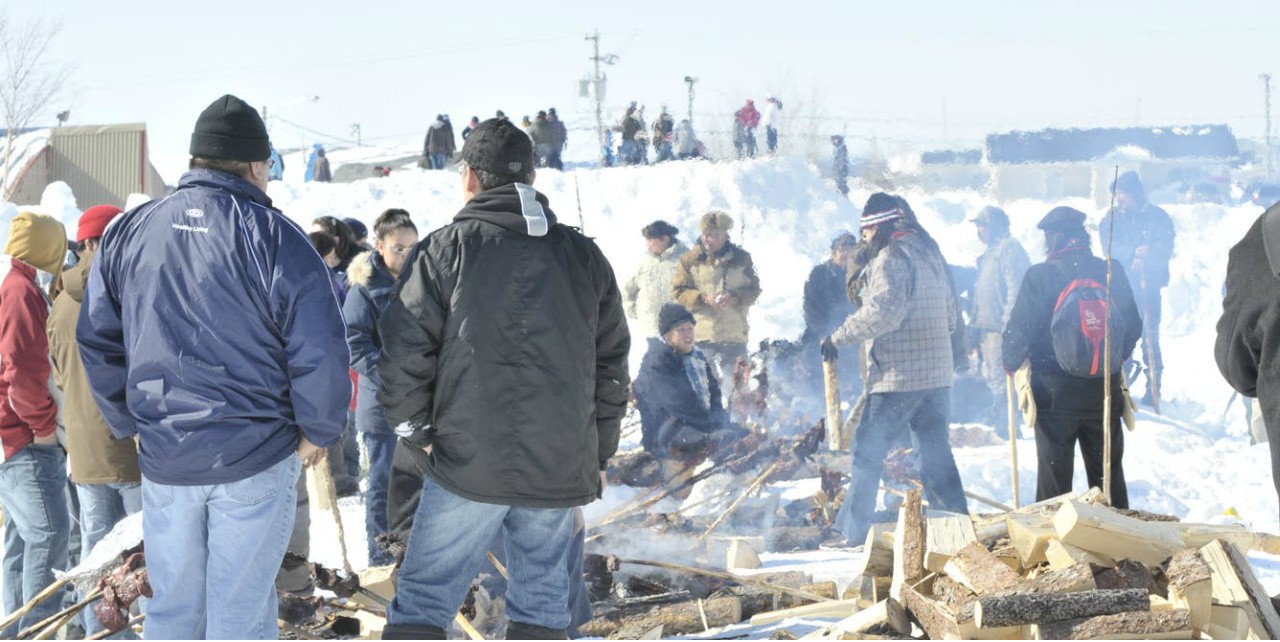 Members of the James Bay Cree gather around the fire as part of a week-long celebration called "wellness week," aimed at improving personal health and wellness in their community in northern Quebec. (Photo: David Dyck Fehderau)

When Emily’s mother lay dying of kidney failure from years of diabetes, Emily begged the doctors to take her kidney and transplant it into her mom. But the doctors refused—Emily had diabetes too. She would need both kidneys herself.

Like many Indigenous groups around the world, the James Bay Cree of northern Quebec have a disproportionately high rate of diabetes. They’re facing it down with a decidedly Indigenous solution: A talking circle in print.

In 2012, the Cree Board of Health and Social Services of James Bay (CBHSSJB) assigned local Cree health representatives to choose people with diabetes whose stories they thought significant—people like Emily. Then they hired me, (a freelance writer and academic), to bring them into print.

Gathered in The Sweet Bloods of Eeyou Istchee: Stories of Diabetes and the James Bay Cree, the stories, at least as much about life in the North as they are about diabetes, are part record, part awareness-raising. They reveal unmistakable connections to colonization. And they are meant to help people heal.

Diabetes is a mounting global challenge costing at least US$825 billion a year. And rates are rising quickly.

The World Health Organization reports, “Globally, an estimated 422 million adults were living with diabetes in 2014, compared to 108 million in 1980. The global prevalence (age-standardized) of diabetes has nearly doubled since 1980, rising from 4.7 per cent to 8.5 per cent in the adult population.” 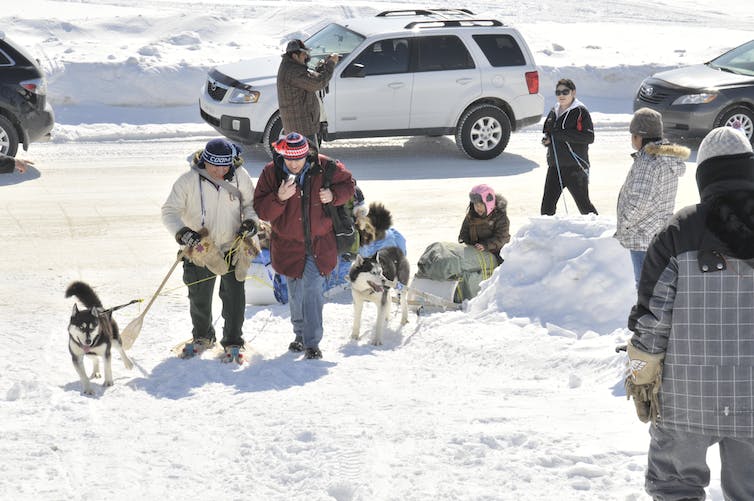 Individuals returning from long traditional healing journeys out on the land are greeted by the community during wellness week. (Photo: David Dyck Fehderau)

Globally, diabetes rates are higher (often several times higher) among Indigenous peoples, and Canada is no exception. While researchers struggle to determine causes and begin to acknowledge that our human relationship to food is more complicated than we knew, Indigenous groups are coming up with their own solutions.

The James Bay Cree of Northern Quebec, a population of 18,000 people, live in 10 communities on their traditional territory of Eeyou Istchee. The territory covers about 450,000 square kilometres, and they actively use all of it in their life on the land. 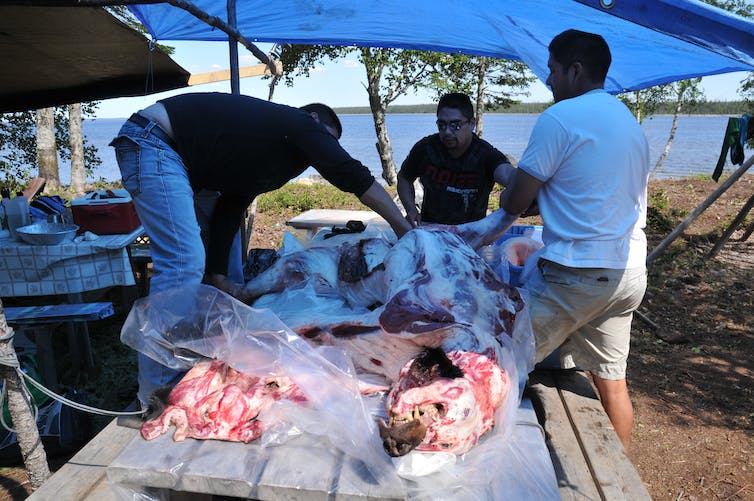 A bear is prepared for the feast at the traditional camp community gathering. (Photo: David Dyck Fehderau)

Currently, every Eeyou Istchee family is directly affected by diabetes. This situation makes for massive overall costs both in health care and in cultural impact as they work to maintain cultural traditions while managing illness, often dying younger than they otherwise would, taking their precious traditional knowledge with them.

Paul Linton, assistant director of public health, states: “It’s a huge problem, and we are trying to get people to start the conversation to see how to fix it. It’s not a simple pill or injection. It involves the cost of food, the housing, the social structures, the traditional teachings, the animals on the land.”

Compounding the problem are misinformation, isolation, earned distrust of western medicine—and silence. Sometimes the silence is borne from stigma—one fellow, for instance, couldn’t tell even his wife of his diabetes for years, keeping his meds in the car—and sometimes from the habit of keeping medical information private.

Getting creative about health care

In 2012, I was living in Eeyou Istchee when the Cree Board of Health and Social Services of James Bay approached me with a project. Fly to the communities, they said. Hear the stories of people living with diabetes and write them up. Travel out again (as often as necessary) to have the storytellers correct and approve them. Then compile them into a book.

They were looking for a print version of a talking circle, a cultural event that brings people together to hear and tell stories, to discuss, problem-solve and correct misinformation—and to heal. 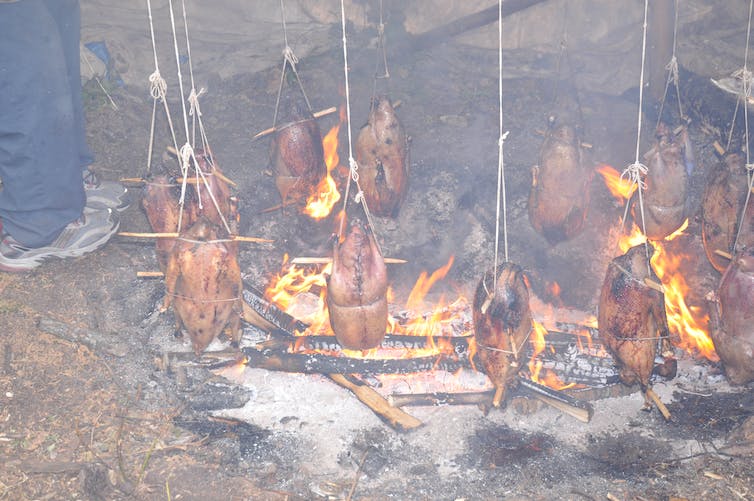 Talking circles, according to the book introduction, assume “that health and wellness or disease and sickness might be as much about a spiritual or emotional or intellectual part of a person as [about the] physical being, … that storytelling is a healing act … [and] that individual healing cannot be separated from community healing.”

This creativity-centred approach is in keeping with a long Indigenous tradition of using story as medicine.

The stories, 27 in all, are sometimes gut-wrenching, often funny, each distinct from the next.

In some of them, diabetes is front and centre. In others, it’s just part of the background of a well-lived life and hardly gets mentioned. In none of them are the storytellers victims. 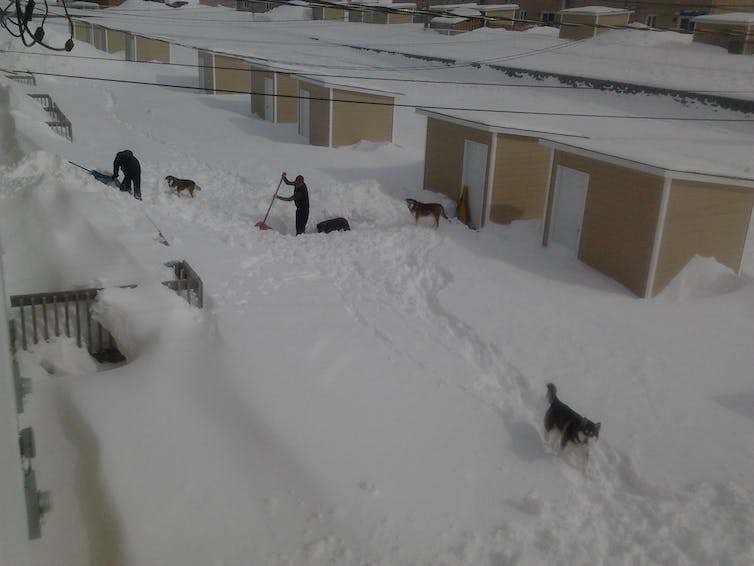 Jonathan, an elite high-school athlete headed for a pro hockey career, learns that most people with his blood sugar levels would be comatose.

Raquel has controlled her diabetes carefully for 30 years but struggles to convince her doctor to take her seriously.

Jack is an amputee who hunts in the bush with one leg (and tells kids that river sharks chewed the other one off).

Leonard runs away from residential school repeatedly, and later deals with the emotional complexity of working for the very government that sent him there.

Angela goes into labour in an ice storm and barely manages not to deliver during the hair-raising cab ride, only to arrive at the wrong hospital and learn that she isn’t permitted to give birth there either. That hospital doesn’t deliver babies and, in fact, has a rule against it.

And Victor tells of radical changes after the river his community depended upon for food and livelihood turned brackish because of a hydroelectric dam. It killed the fish, it made the water undrinkable and it forced the local diet and way of life to change.

Coming up repeatedly in the stories is the long-term impact on Cree health of residential schools, of radical changes in exercise and diet and of industry-related projects like the James Bay hydroelectric dam.

In other words, the stories reveal ways in which the disease is intimately connected to a history of colonization.

Taken together, they paint a vivid picture of life in the North. And of people facing diabetes with agency, tremendous creativity and capacity.

The material was originally written for Indigenous peoples of Canada and recently made available to the public. Funded in part by Health Canada, the book is free to people living on Canadian Indigenous reserves and traditional territories and available on Amazon for the rest of us.

All proceeds go to long-term health care for people living with diabetes in Eeyou Istchee.

You can read a sample story at the Sweet Bloods website. 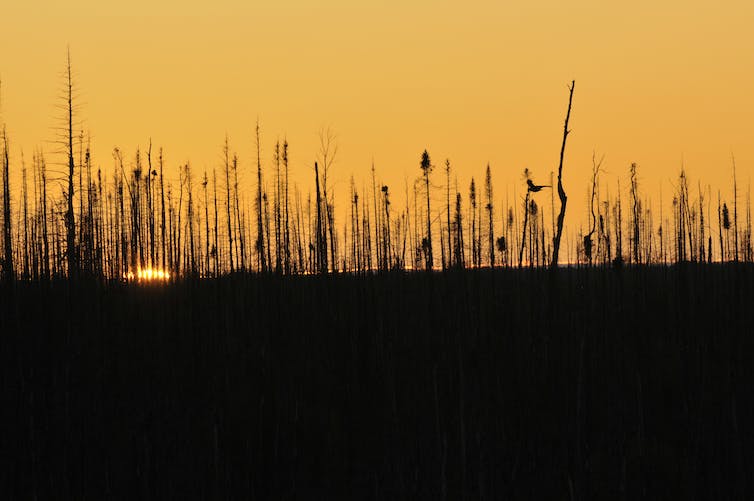 The sun sets over the town of Mistissini in northern Quebec. (Photo: David Dyck Fehderau)

Ruth Dyck Fehderau teaches creative writing and English literature at the University of Alberta. She is currently working on a novel and on a second non-fiction book with the James Bay Cree of northern Quebec.

This article originally appeared Jan. 15 in The Conversation.