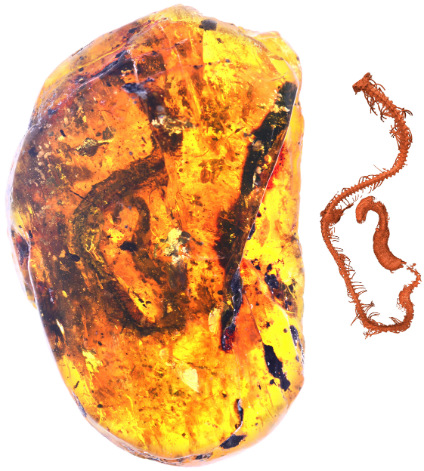 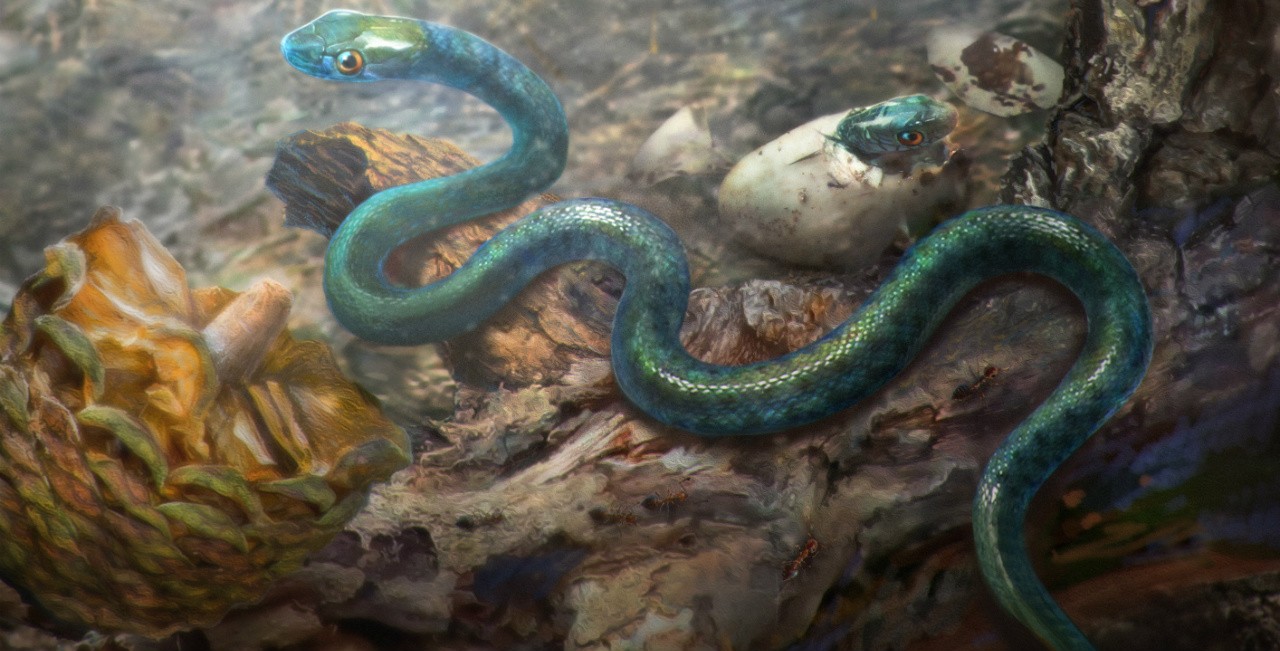 A fossilized baby snake discovered in a 105-million-year-old amber fragment shows the ancient species lived in a forest environment in what is now Myanmar. (Illustration: Cheung Chung Tat)

The first-ever discovery of an ancient snake embryo, preserved in 105-million-year-old amber, provides important new information on the evolution of modern snakes, according to a new study led by University of Alberta paleontologists.

“This snake is linked to ancient snakes from Argentina, Africa, India and Australia,” explained paleontologist Michael Caldwell, lead author and professor in the Department of Biological Sciences. “It is an important—and until now, missing—component of understanding snake evolution from southern continents, that is Gondwana, in the mid-Mesozoic.”

Caldwell and his international team, including collaborators from Australia, China and the United States, have tracked the migration of these ancient Gondwanan snakes beginning 180 million years ago when they were carried by tectonic movements of continents and parts of continents, from Australia and India, to Madagascar and Africa, and finally to Asia, in modern-day India and Myanmar.

The amber fragment in which the specimen was found also provided important clues about its environment.

Using CT scans, the scientific team studied the ancient snake and compared it with the young of modern snakes. Their results yielded unexpected insight into the development and embryology of the ancient specimen, including the formation of the vertebrae and notochord.

“All of these data refine our understanding of early snake evolution, as 100-million year-old snakes are known from only 20 or so relatively complete fossil snake species,” said Caldwell. “There is a great deal of new information preserved in this new fossilized baby snake.”

The paper, “A Mid-Cretaceous Embryonic-to-Neonate Snake in Amber From Myanmar,” was published in Science Advances.

The research was conducted in collaboration with the China University of Geosciences, the Institute of Zoology at the Chinese Academy of Sciences, Midwestern University, the South Australian Museum, Flinders University, the Royal Saskatchewan Museum, the University of Regina, the Paleo-Dairy Museum of Natural History and the Beijing Forestry University.