Institute was designed for rapid response to viral pandemic. 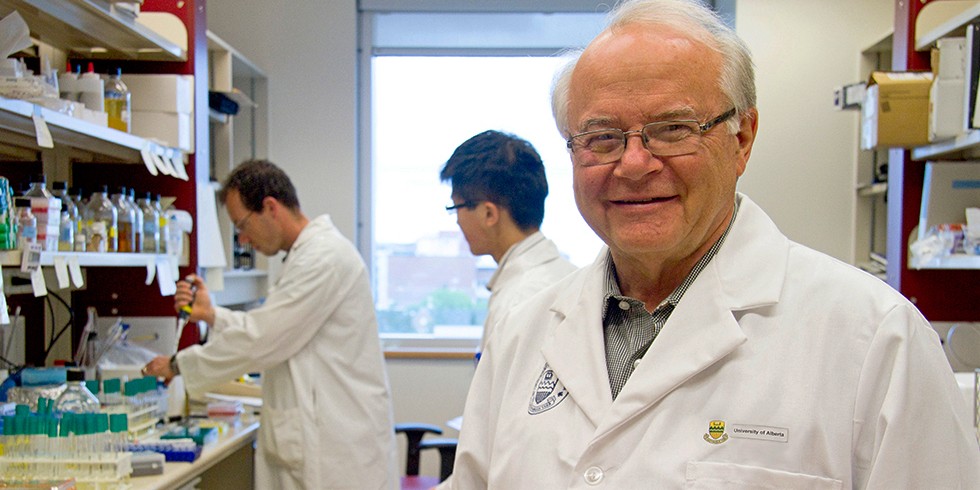 Lorne Tyrrell, founding director of the Li Ka Shing Institute of Virology, says some of Canada's top virologists at the institute are focusing on research into diagnostic tests, antiviral drugs and vaccines against the new coronavirus. (Photo: Faculty of Medicine & Dentistry)

When word started to trickle out of China in early January that a new and deadly virus was spreading fast, Lorne Tyrrell immediately pulled together more than 20 members of the Li Ka Shing Institute of Virology, including some of Canada's top virologists, to brainstorm how they could help.

By the time the Government of Canada announced $26.8 million for research into COVID-19, University of Alberta teams had 17 project proposals ready to go, three of which were immediately funded by the Canadian Institutes of Health Research (CIHR). The others were poised to begin work as soon as more funding became available.

The Li Ka Shing Institute of Virology was set up at the U of A in 2010 to be ready for a moment just like this.

“We support research in emerging diseases,” said Tyrrell, a member of the Canadian Medical Hall of Fame, GSK Chair in Virology and a leading hepatitis B researcher.

“The public health response to a pandemic must be immediate, and the research-based responses to find antivirals and vaccines must also begin within days or weeks.”

Carla Craveiro Salvado, operations and research manager of the institute, said researchers with knowledge and experience of other viruses are always poised to pivot and deliver the rapid response required when a new pandemic hits.

“It was very exciting to see everyone energized and committed to the same goal, to see what we can do collectively to fight this virus from several different aspects,” she said.

Among those in the room for the brainstorming session were virologists David Evans and Tom Hobman, infectious disease specialist Nelson Lee, and Graham Tipples, medical-scientific director of Alberta Public Laboratories and associate adjunct professor of microbiology and immunology.

After CIHR’s call for rapid responses to COVID-19, “we had a week to write grant proposals,” Tyrrell said. “They were reviewed over a weekend and we were notified right away.”

The rapid response grant projects must be completed within two years.

Matthias Götte’s newly published research into remdesivir, a drug proven to be active against Ebola virus but with even more activity against two other deadly members of the coronavirus family—severe acute respiratory syndrome (SARS) and Middle East respiratory syndrome (MERS)—was immediately fast-tracked. The drug works by attacking the polymerase of the viruses—enzymes that allow them to replicate. Götte, a biochemist and chair of medical microbiology and immunology, had already cloned polymerases for many of the RNA viruses considered by the World Health Organization as most likely to emerge as threats to human health.

“Because Götte had the polymerase set up for MERS and SARS and he’d tested the compound in those two, he’s now able to test it against COVID-19 and we hope it will have a similar effect,” said Tyrrell.

And Chris Le, director of analytical and environmental toxicology in the U of A’s Department of Laboratory Medicine and Pathology, is working on diagnostic tests that could be used to identify patients infected with COVID-19 at home or in remote settings.

More funding has now been announced by the federal government, and the second round includes support for a potential vaccine proposed by Michael Houghton, director of the Li Ka Shing Applied Virology Institute; for Timothy Caulfield to map and address misinformation surrounding the coronavirus outbreak; for Michael James to work toward the development of an anti-COVID-19 therapeutic; and for Matthew Croxen, who is sequencing the RNA of coronavirus, among others.

Overall, 11 U of A projects received $5.8 million in funding from the federal government’s Canadian 2019 Novel Coronavirus (COVID-19) Rapid Research competition.

Three-pronged approach to fight the pandemic

The institute recently received samples of the novel coronavirus COVID-19. Permits were obtained to work with the virus. Level three containment precautions were put in place several years ago to accommodate work with pathogens such as COVID-19. The institute has custom-built sealed labs that allow researchers to work safely with deadly pathogens. Workers wear special gowns, masks and headgear to protect their eyes.

“It’s a little more awkward to work in because you’re fully protected all the time,” said Tyrrell.

The U of A researchers will co-operate and collaborate with other major virology labs in Winnipeg and Saskatoon, as well as others around the world.

Tyrrell pointed out that a concerted worldwide approach will be needed to quell COVID-19.

“The concern about COVID-19 is that it has a higher transmissibility than either MERS or SARS,” said Tyrrell. “The transmission rate seems to be 2.2 people for every one person infected. It also has a significant mortality rate at about three per cent.”

“Strong public health measures such as self-isolation, social distancing and avoiding large public gatherings at the beginning of an epidemic will try to change that infection rate curve.

“The second thing we need desperately is approved antivirals to be used in people who are sick enough to end up in hospital. New effective antivirals would help to take some of the fear out of this situation and would likely decrease hospitalization and mortality rates.

“And the third thing—just like with influenza—we need a vaccine against COVID-19, to try to decrease the number of people who get infected,” Tyrrell said.

He added that while public health measures were successful in slowing both SARS and MERS, a vaccine is usually required to stop the destruction caused by highly infectious viruses.

“The only two viruses in the world that we know have been completely eliminated are smallpox and rinderpest, an animal infection, and that was done by vaccination,” Tyrrell said.

“We did set up in the beginning so that we would have funding to sponsor rapid responses to new viruses,” said Tyrrell, who pooled funding from numerous sources to found the institute. Hong Kong businessman Li Ka Shing donated $25 million to establish an endowment to operate the institute. The Canada Foundation for Innovation funded research infrastructure grants (Evans and Tyrrell) to the tune of $35 million. The Alberta government promised a further $5 million a year in recognition of the potential to diversify the economy by turning research discoveries into profitable pharmaceutical products. At least five products were brought to market by researchers prior to the institute’s establishment and more are coming to build on that track record.

“The Li Ka Shing Institute of Virology has focused on research and discoveries, and the Applied Institute focuses on how to take those discoveries to benefit patients,” said Tyrrell.

The first time the institute’s rapid response was called into action was when researchers in Nevada announced a retrovirus called xenotropic murine leukemia virus-related virus (XMRV) was the likely cause of chronic fatigue syndrome.

“As it turned out, that discovery was false,” said Tyrrell. “It was very important because a lot of people suffer from chronic fatigue and if there was a virus there, we wanted to confirm it. But there were several labs around the world, including ours, that could not confirm it, and the original paper was retracted.”

The institute’s next rapid response target was Zika virus. Tom Hobman, Canada Research Chair in RNA Viruses and Host Interactions, has since become Canada’s top researcher in the quest to understand, treat and vaccinate against Zika, a mosquito-borne virus that causes birth defects.

“We had some flexible money within the institute to support that rapid response,” said Tyrrell. “Flexible funds are key to supporting discovery.”

Tyrrell recounted how, when he was dean of the U of A’s Faculty of Medicine & Dentistry, Ray Rajotte stood to lose his research team on islet cell transplant due to a lack of funding. A one-time injection of flexible funds from donors in 1999 allowed them time to publish what became known as the Edmonton Protocol, a groundbreaking method to treat Type 1 diabetes.

“The flexible funding helped to keep the team together until further funding could be procured. The current situation is similar. Although we have funding from CIHR, we have some excellent researchers who desperately need funding for the full-court press to control COVID-19,” said Tyrrell.