We need to ask some hard questions about land use, and to question the development priorities that continue to shape Edmonton and many other North American cities.

Embracing ‘citified’ agriculture means rethinking land use priorities, says U of A researcher

Although beneficial, urban agriculture only scratches the surface of how cities need to be rethought. 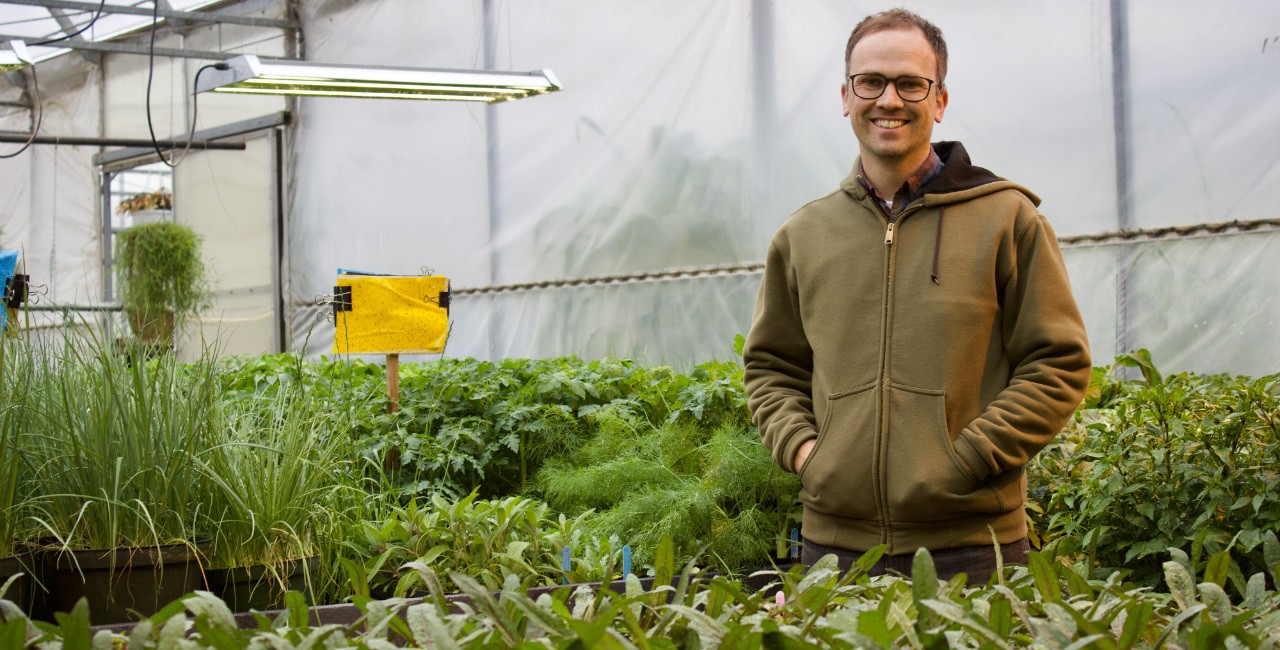 Michael Granzow says projects like community gardens in cities are beneficial, but they need to be part of longer-term planning that also looks at issues like land use, housing and income inequality. (Photo: Supplied)

Community gardens, the feel-good darlings of the growing season, are great for raising awareness about sustainability—but they’re just scratching the surface of a much larger harvest, according to a University of Alberta researcher.

They and other ag-based initiatives bring a bounty of benefits to cities by drawing people together, creating common spaces, boosting biodiversity, adding to local food production and in some cases, like the U of A’s Green and Gold Garden, raising money for good causes. But while those benefits should be celebrated, there are bigger-picture questions to consider, said Michael Granzow, who is studying the issue for a PhD in sociology through the Faculty of Arts.

“To deal with problems like food insecurity and address underlying issues, we need to also consider factors like income inequality and availability of affordable housing,” he said.

Although projects like community gardens and vertical farming—where produce is grown stacked in layers—are great, we have to be careful not to overstate their ability to feed cities, he believes.

The idea of citified agriculture is still budding for many cities in Canada, but Edmonton, Granzow noted, was one of the first to include food as an urban question, first in its 2008 municipal development plan and then in 2012 by launching fresh, a food and urban agriculture strategy that included creating a food council. And though that’s a good start, concrete policies are still lacking, he believes.

“The city has moved in the right direction. Fresh is an ambitious policy, but some of the language is vague and it includes few hard targets. There’s still uncertainty about what urban agriculture will look like in the city 20 or 30 years from now,” he said.

Ultimately, cities like Edmonton need to address political questions about food access and the environment, he said.

“It’s important we think about how urban agriculture projects are working in a larger context and how they’re actually addressing social, environmental and food-related concerns, as opposed to how we assume they’re doing this.

“There’s a need to specifically define what urban agriculture is and how it might differ from one urban context to another.”

That means governments need to decide whether and how they’ll make room for related issues like entrepreneurial food ventures and how that will be reflected in land-use policy, Granzow said.

“It’s easy to support the idea of using vacant lots for community gardens, but that ultimately is a temporary use until the lot is developed. We also need to think about these projects on a long-term basis.”

Adding to that theory is a recent U of A report revealing that prime farmland surrounding Edmonton is being eaten up for residential and industrial use instead of being preserved for crops, Granzow noted. “Beyond focusing on backyard bees and hens, policy around urban agriculture has to consider ways to slow urban sprawl.”

“If we’re going to think about it as part of a response to environmental concerns or food insecurity, it’s going to require some major changes. We need to ask some hard questions about land use, and to question the development priorities that continue to shape Edmonton and many other North American cities.”

It’s an exciting opportunity, he added. “It raises awareness about the importance of local food and helps us rethink our reliance on a food system dependent on an unsustainable model of industrialized agriculture.”

Meanwhile, city-driven projects, including vacant lots for gardens, beekeeping and backyard hens, along with other community gardens such as the U of A-based Prairie Urban Farm, where Granzow volunteers and serves as an adviser, are important to what is a much larger movement in reimagining what a city is and what it could be, he believes.

“They all contribute to challenging a sanitized view of the city as separate from processes of food production.”

“It’s a new way to think about the idea of the city and its relationship to the environment. You start to see the city differently through this lens and ask new kinds of questions. What can we grow here? Is there enough sunlight? Where’s the best soil? How can we capture and distribute water?

“Urban agriculture isn’t going to be the answer to all of our problems, but it’s a space of hope—a small but crucial part of a larger move towards ecologically and socially inspired models of urbanism.”

Embracing ‘citified’ agriculture means rethinking land use priorities, says U of A researcher