Online resource created by U of A researchers lets people report cases in lakes across North America, alert others and learn more about the common water rash. 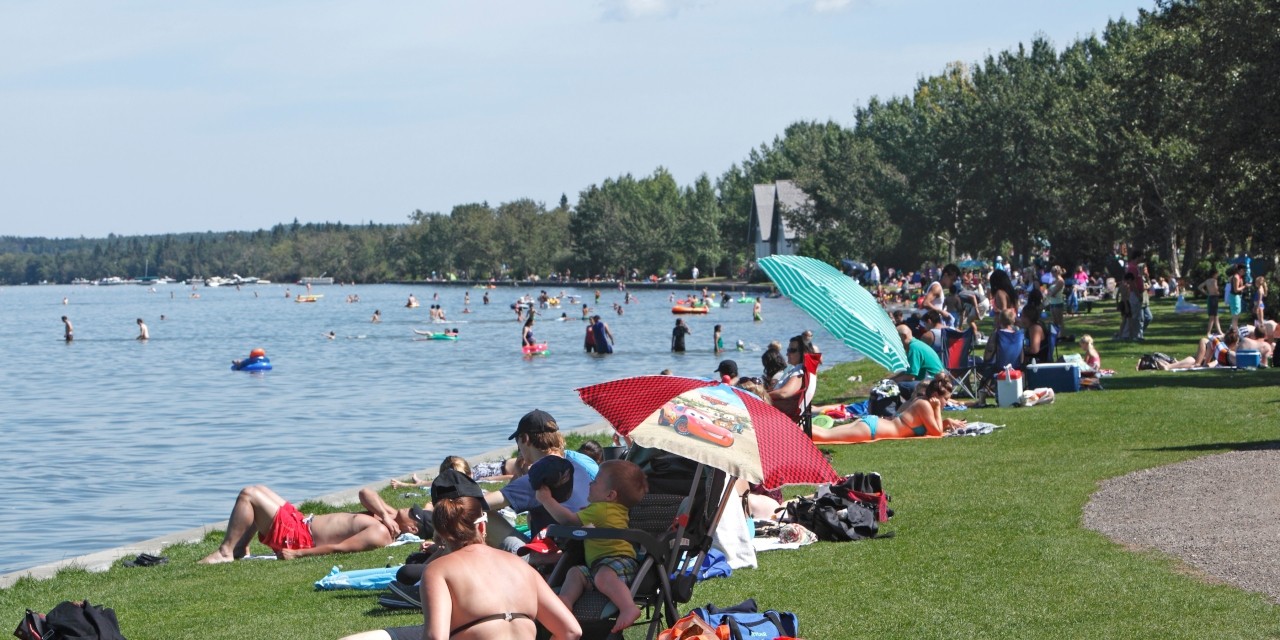 A new website lets people report cases of swimmer's itch in lakes to help others avoid the water rash, and help U of A researchers pinpoint when and where the parasite that causes it is appearing across North America. (Photo: Getty Images)
Families enjoying an Unpollluted clean lake with grass. Colorful umbrellas and air matresses. Small Town Sylvan Lake Alberta.

People wondering about catching swimmer’s itch can get in the know with a University of Alberta website before heading to the lake this summer.

SWIMMERSITCH.ca lets people report their own cases of the rash, alert others to problem areas around North America, learn more about the condition and fill out a survey that helps U of A researchers pinpoint when and where the parasites that cause swimmer’s itch are most prevalent.

Swimmer’s itch is contracted by swimming in lakes, and is caused by the larvae of a worm-like parasites that are released into the water by infected snails and can penetrate the skin to cause the itch.

The website was created to measure how widespread the issue is by connecting with “citizen scientists,” said Patrick Hanington, a researcher with the School of Public Health.

“We want to help people make informed choices about where they swim by providing information on where swimmer’s itch is occurring and through education, which is what the website provides. We want to use it as a tool to connect with people.”

The website provides updates on swimmer’s itch research, an online survey that lets people report their cases and a resulting map that shows the shifting locations and dates of outbreaks (factors like wind and time of day can influence where the parasite is most abundant), so they can decide whether they want to visit a particular lake that day.

Using the website survey, he and his team studied 3,800 self-reported cases across Canada and the U.S. between 2013 and 2015 and were able to conclude that swimmer’s itch could be a problem at any lake in the country. In Alberta alone, the website has recorded case reports from 101 lakes across the province.

“Lakes in Alberta often support high biodiversity of animals we recognize and the parasites that infect them. It’s important to keep that ecological value in mind; lakes aren’t meant to be as pristine as swimming pools.”

That doesn’t mean people should stop going to their favourite lakes, he added.

“You should take advantage of all the recreational opportunities in Alberta, just be aware of what the risks are. It’s no different than experiencing horseflies and mosquitoes. The swimmer’s itch parasites are part of the ecosystem,” he said.

If people do get the skin condition, it’s not a health threat that usually requires a visit to the doctor, he added.

“The first stop should be to the drugstore for anti-itch cream, even for bad cases,” he said, adding the secondary bacterial infection that can occur from excessive scratching is far worse than the itch itself.