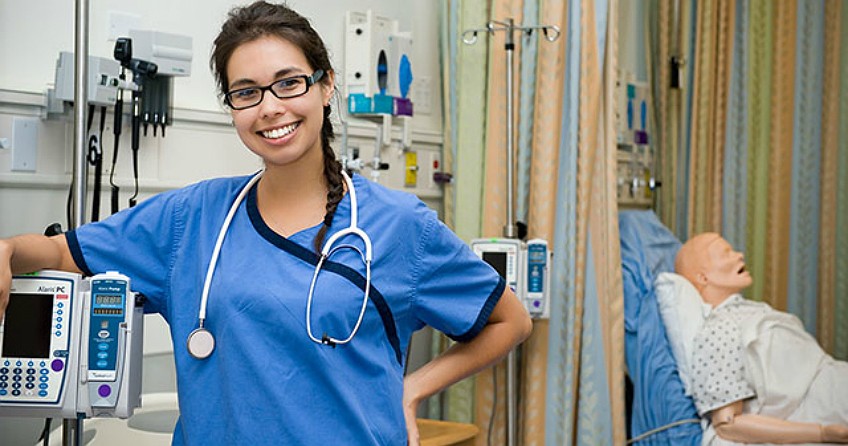 The U of A's Faculty of Nursing placed second in Canada in the latest Maclean's rankings of Canadian universities. Six other U of A programs also finished in the top five nationally. (Photo: Faculty of Nursing)

The University of Alberta’s nursing program held fast at second place in the latest Maclean’s rankings of Canadian universities, while education moved up to third place from fourth last year.

"These ratings affirm the Faculty of Nursing's long-standing reputation as a world leader,” said dean of nursing Greta Cummings, who attributed the faculty’s success to “a critical mass of exceptional students and faculty, drawn here because of our innovative programming and curriculum grounded in strong clinical partnerships.”

The U of A’s Faculty of Nursing was also ranked second in Canada this year by the QS World University Rankings.

“This is very good news for the faculty,” said dean of education Jennifer Tupper. “Our strengths in teaching, research, professional contributions, community engagements and service are diverse and numerous. This strong ranking shows that we are deeply committed to the success of our students.”

A number of U of A programs placed in the top five in the fourth annual Maclean’s survey of best programs. Biology, business and environmental sciences placed fourth, while engineering and mathematics landed fifth.

University programs are evaluated according to data provided by Scopus—part of the Elsevier Research Intelligence portfolio, one of the most comprehensive compendiums of peer-reviewed literature in the world—and based on a survey of university faculty and senior administrators.

The Maclean’s university rankings were released today. Now in their 28th year, the annual rankings are based on a series of performance indicators in five broad areas: students (28 per cent of score), faculty (24 per cent), resources (20 per cent), student support (13 per cent) and reputation (15 per cent).

Universities are placed in one of three categories, and the University of Alberta competes in the category reserved for universities that offer a broad range of PhD programs and research, and have a medical school.

Overall, the U of A placed sixth in that category, down from fifth last year. But the university placed first for percentage of full-time instructors who have a PhD, a first professional degree or terminal degree (other highest degree) in their field, third for the proportion of the library budget allocated to updating the university’s collection, fourth for number of faculty awards and total research dollars, and fifth in a category called “Leaders of Tomorrow.”

The Maclean’s rankings follow news last month that U of A graduates have the highest employment rate in Canada and are moving up in the list of the world’s most employable, according to the latest global rankings.

In July, the U of A finished among the top 100 in 20 areas of expertise assessed by the Shanghai Ranking Consultancy for its global rankings of academic subjects. The U of A placed ninth for environmental sciences and engineering—ahead of Princeton and MIT—and 17th for mining and mineral engineering, and business administration, which edged out the University of Toronto by two places. Other sound showings included 29th in instruments science and technology, 33rd in agricultural sciences, 35th in chemical engineering, 38th in nursing and 46th in earth sciences.

Earlier in the year, the 2018 QS World University Rankings by Subject saw the U of A rank seventh in sports-related subjects, 14th in mining engineering, 18th in nursing, 41st in education, 47th in pharmacy and pharmacology, and 47th in archeology.

The 2018 Times Higher Education subject rankings placed the U of A 60th in education, 77th in clinical, pre-clinical and health, 83rd in law and 99th in psychology.